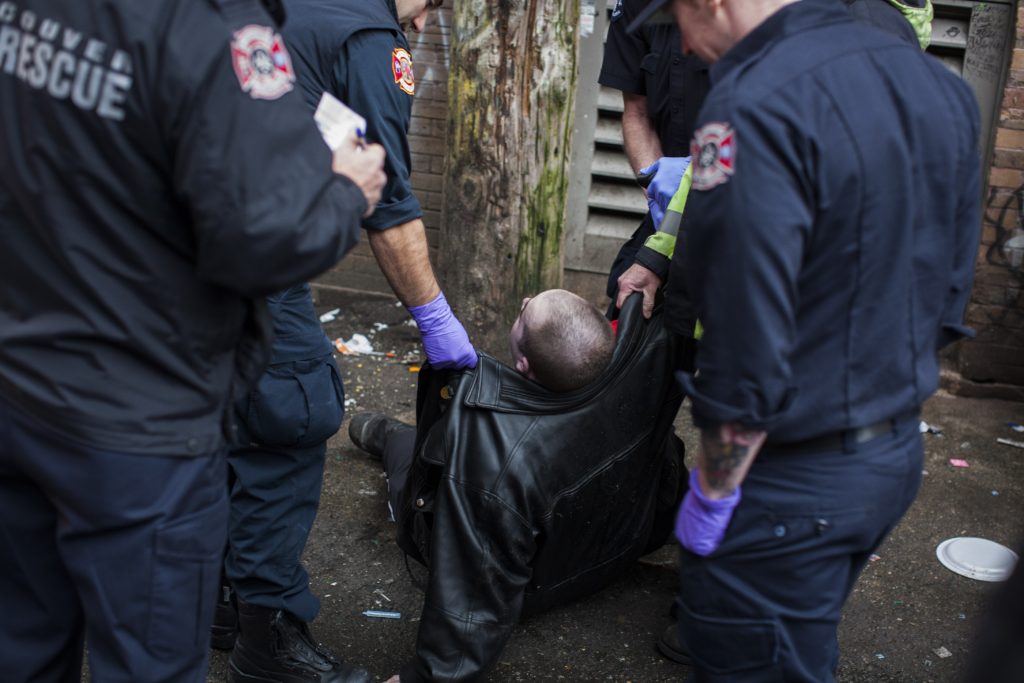 British Columbia’s Fentanyl Crisis:
The deadly drug claimed 914 lives
in the province in 2016

The fentanyl crisis was responsible for 914 deaths in British Columbia in 2016, an increase of almost 80 per cent over the previous year (510). The deadly drug is 100 time more potent than heroin and is killing addicts and casual users indiscriminately. If not for the volunteers providing services in pop-up tents and trailers there would be bodies lying in the streets.

For the past year frontline workers have complained that no one is willing to seriously invest in ending this crisis. Some groups even turned to crowd funding reaching out to communities across the province and country to help keep people alive. In moments of despair some volunteers have even suggested that if they stopped saving lives maybe more would be done.

In February the federal government announced it would give $1.4 billion to B.C. to bolster its mental health and health care services. In addition the government will spend $10 million to help support the province’s emergency response efforts, as well as another $65 million to combat the impacts of the drug nationwide.

Last week Prime Minister Justin Trudeau visited Vancouver where he toured the Downtown Eastside with first responders. Speaking at a news conference later on he addressed the rising fentanyl death toll, not just in B.C. but across the country.

“This is a crisis that seems, for most Canadians, to be very far away. Something that’s limited to certain tougher parts of town, to the West Coast, but we are seeing a spread of opioids across the country and we’re seeing it spread far and wide across socio-economic levels,” he said.

I have spent the last 10 years on and off in the Downtown Eastside, which is considered ground zero of this crisis in BC. At times the scene is depressing, shocking and overwhelming. Recently a reporter and myself were working on a story covering welfare day in the neighbourhood. As we circled the block checking out scene we noticed that the dope dealers were tracking us. As we were nearing one of several safe injection popup locations we decided for our own safety to let the drug dealers know that we were journalists working in the area. This was the first time in Canada I had to go through something like this.

As we continued to document the day the mood became darker. Sirens heard in the distance every few minutes signal another overdose. It wasn’t too long before a man dropped in front of me. I started photographing as his friend was trying to wake him up. A frontline worker came out of nowhere with a naxolone kit – the lifesaving antidote to fentanyl which can be picked up for free at hundreds of locations across B.C. – disappearing for a moment and returning with an oxygen tank. The first responders arrived minutes later, already looking exhausted as the man came back to life. As this is unraveling in front of my eyes there are people just metres away preparing to roll the dice with the dangerous drug.

I live down the street from ground zero and my partner of seven years has been working in the area since I met her. It is hard on both of us, many of the stories I am assigned to are about people she knows. She watches as I edit the lives of her friends intertwined with death.

Rafal Gerszak was born in Poland in 1980. He was forced to flee his home due to the Soviet regime and his family lived for some time in a West German refugee camp before immigrating to Canada in 1990. After graduating from Langara College he worked on long-term projects dealing with the underlying issues of the ongoing Afghan conflict. Currently he examines life in Canada's Northern and most remote communities through photography and video. He is a founding member of Boreal Collective and calls Canada's Pacific Northwest home, where he lives with two retired sled dogs.
Current Affairs