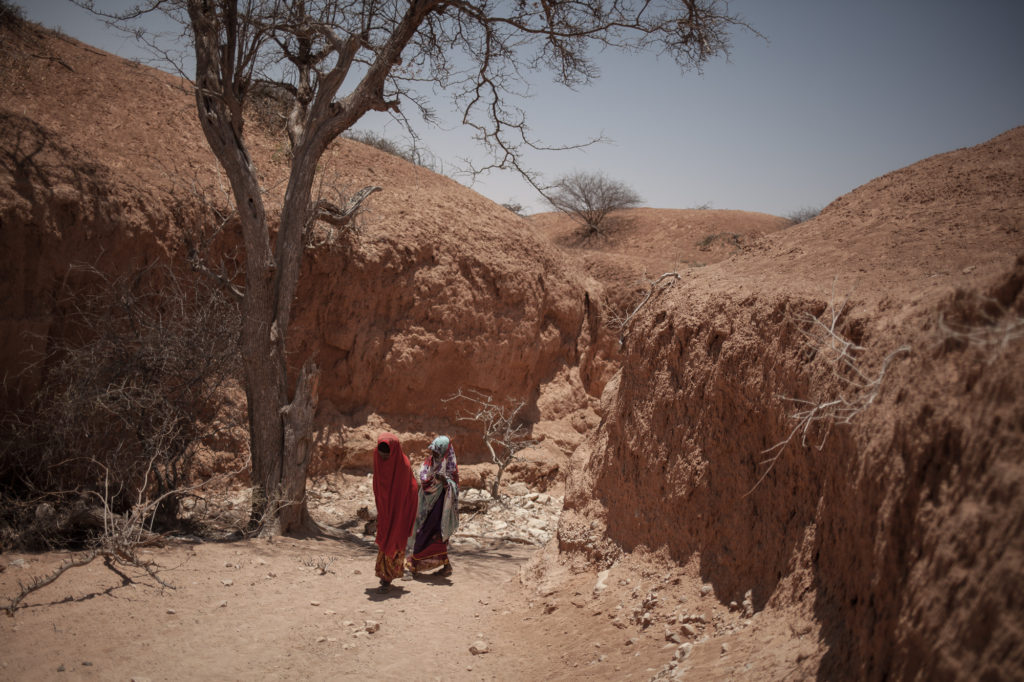 A deadly drought is currently sweeping across several countries in Africa including Somalia, South Sudan, Nigeria and Yemen. One area which has received little media attention is the self-declared independent state of Somaliland. Adrienne Suprenant has been reporting on the ground there for the past year (with a focus on the drought since April). The following is an interview with the Canadian photojournalist about the situation on the ground.

True North Photo Journal: A handful of African nations including Somalia, South Sudan, Nigeria and Yemen are currently experiencing crippling droughts. What is the situation like on the ground in Somaliland?

Adrienne Suprenant: The regions of Somaliland on the frontier with Puntland have been dry for almost two years. Pastors are estimated to have lost 90% of their cattle there, and 80% in the rest of the country. Both the people and the economy have suffered from those losses, which makes it harder for the government and the city people to bring help (food, medicine, etc) to the affected zones. I have seen some children die, cases of measles, and many children suffering of malnutrition, diarrhea, and fever. The informal settlements where destitute pastors reunite closer from the cities lack sanitary infrastructure and receive little help. People say that even with the rain coming, the situation would only worsen, as disease would spread more easily, and people are currently in an extremely weak state.

TN: Could you explain the difference between Somaliland and Somalia?

AS: Historically, the North of Somalia (Somaliland) was an English protectorate and Somalia South-Central, whose capital is Mogadishu, was an Italian colony. The English are said to have had little influence over local culture and traditional judiciary and political systems, in comparison with Italians. The majority clans in each region are also different.

After independence the protectorate and the colony united, but a three year civil war (1988-1991), during which Somalia’s army bombarded Somaliland’s capital, killed 50,000 people and forced half a million on the road to exile. This led Somaliland to proclaim its independence.

Since then, South-Central Somalia has fallen into a cycle of violence (encouraged by exterior interests and interference), while Somaliland, left to itself, managed to acquire a relative peace. In Somaliland, the last attack of Al Shabaab (an Al Qaeda affiliated islamist group) was in 2008. The last in Mogadishu happened last month (June 22).

In regards to the drought, the humanitarian help is harder to deliver in South-Central Somalia and Puntland, because of on-going conflict and instability. But due to its unrecognized status Somaliland receives less help and international attention.

TN: How many people in Somaliland are currently being affected by the famine?

AS: There is no famine declared yet in Somaliland, nor in Somalia. Of the four countries affected by severe drought and humanitarian crisis (South Sudan, Somalia, Yemen and Nigeria), only South Sudan has seen some areas officially declared in a stage of famine. United Nations recently declared the famine eased, but starvation still threatens.

In all of Somalia, when I have been reporting in April, 6.2 million people were in urgent need of humanitarian help. Of those, 363 000 children were suffering from malnutrition  In Somaliland, half the population, an estimated 1.6 million people need help to survive.

TN: It’s estimated that nearly 70 per cent of Somaliland’s inhabitants depend on cattle for survival. How has this impacted locals?

AS: The drought is impacting first the herders, that loose their means of subsistance and are forced to settle near towns and roads. Then it affects the communities receiving all those IDP’s, as they share their rations, and their water with those who need. And then it globally affects Somaliland’s economy as the sale of cattle represents 60 per cent of the state budget. Especially before  Eïd, exportation of cattle used to be very high. But since most of the cattle are dead, and those left are too weak to give meat, the ministry of finance admits having lost 20 per cent of its budget in the first semester of 2017.

TN: How are local governments and NGOs responding to the crisis?

AS: The local government of Somaliland cancelled the national holiday on the 18th of May, to transfer the celebration’s funds to those affected by the drought. The local Drought Response Comity has been very active since November 2016, in doing local fundraising and delivering aid to villages. On the field I have seen work from organizations like Care, Norwegian Refugee Council, Islamic Relief  and the IOM. In the villages out of the main roads, help is scarce or nonexistent, and it is local solidarity and sharing that allows people to have water to drink, and rice to feed themselves. As locals put it “Drought made us all equal, because those who have share with those who don’t.”

TN: Somaliland’s foreign minister recently said that the international community’s refusal to recognize the republic 26 years after it declared independence means that aid is much slower in arriving there than to other countries. Have the people you have spoken to voiced similar concerns?

AS: It is common to hear this. The reason is the aid is part of Somalia’s relief plan, as Somaliland is not recognized a country.

TN: What is the situation looking like in the near future?

AS: The Horn of Africa has experienced recurrent droughts. We can remember the 70’s drought in Ethiopia, the 2011 one in Somalia, etc. It is one of the regions most vulnerable to the El Nino phenomenon, and I doubt this will get better with time. If pastors only restitute their cattle when the rain comes, but that no plan for irrigation of the land, or conservation of the rainy season water inlands is made, this year’s scenario will only repeat itself.

TN: What can the international community do to prevent more people from dying?

AS: When I went reporting, only 21 per cent of the necessary funds to help people in South Sudan, Yemen, Somalia and Nigeria had been raised by the United Nations. There is an urgent need for fundings, but more than anything, for implementation of long-term solutions to allow the vulnerable populations to adapt to climate change.

What I have heard a lot of local authorities say, is that a plan and financing are needed to make Somaliland more resilient to the recurring droughts.

Adrienne Surprenant is a Canadian photojournalist currently working out of Somaliland. After studying commercial photography she turned her interest toward documentary photography. She has been freelancing for a variety of national and international publications ever since.
Current Affairs