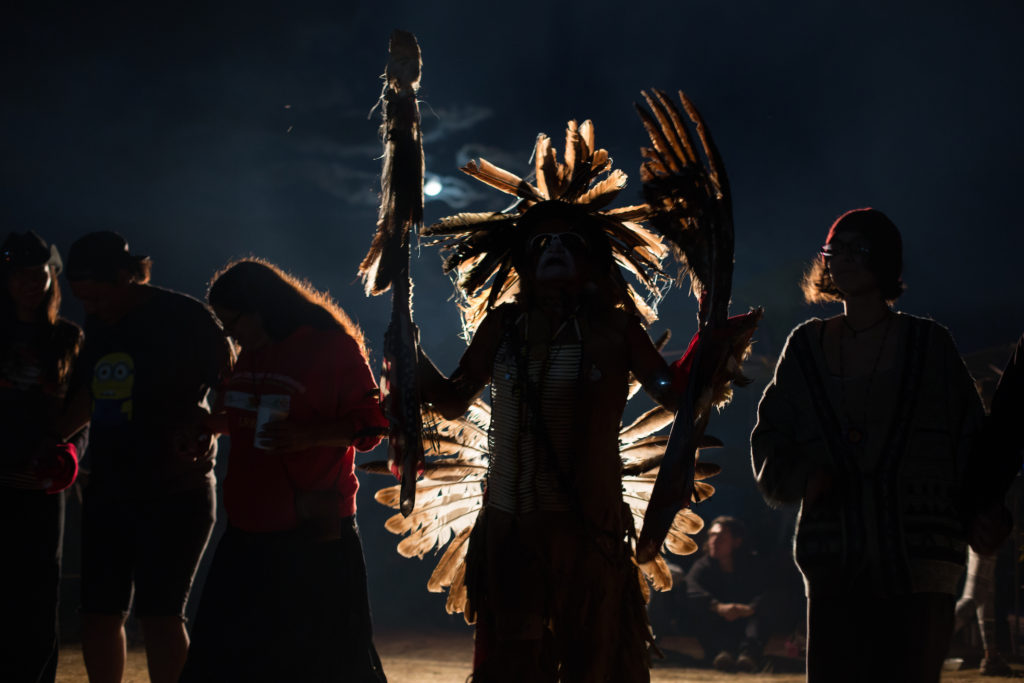 “When I think about leaving I feel like I’m walking out on a ceremony that’s not done. I don’t feel right about it.” –Wanbli Mani, Santee Sioux from Nebraska

What’s happening at Standing Rock is not a protest. This is not a day-trip march, followed by an evening warm at home. It is not organized by lobby groups or about tweaking a bill. It is not rooted in the middle class. It is a movement, more comparable to the push for Civil Rights or early feminist battles. In the way of all revolutions, it is a struggle to survive.

“This war is against greed, ignorance and laziness,” says Phyllis Young. She is an Elder of the Standing Rock Sioux tribe who has seen her people suffer through addictions, poverty, suicide, and health epidemics like diabetes and heart disease. “People ask us, ‘why are you protecting the water?’ Ask the oil companies why are they destroying the water.”

In April 2016 water protectors began gathering at a spirit camp on the northernmost edge of the Standing Rock Sioux reservation, living in ceremony and opposition to the Dakota Access Pipeline. The imminently complete $3.78 bill Energy Transfer Partners project is a threat to the tribe’s water and sacred land but it is also the latest instance in a history of broken treaties. Investors in the project point out there are already natural gas pipelines under the river. But for the people of Standing Rock, the fight against this specific pipeline is about asserting the right to choose what happens in their territory, to their water and to their bodies. It is a struggle to reclaim rights and sovereignty and a fight to recover cultural, familial and individual health after generations of colonization.

“Water is our identity, it’s who we are, ” says Amawon Weeden, of the Mashpee Wampanoag tribe. The youth group leader says he couldn’t stand by and watch Indigenous people be victimized without doing something to help so he packed up to join the camps.

In the early days, there were only a couple dozen people at Sacred Stone camp. By late August they had been joined by hundreds of other tribes, environmental groups and non-Indigenous supporters. The population burst upwards of 8,000 people at its peak and supporters overflowed into smaller satellite camps on the floodplain, like the Oceti Sakowin and Rosebud, making this the largest gathering of politically motivated Indigenous people in living memory. The last time that this many of the Lakota, Dakota, and Nakota people were gathered together at a sacred fire was before the 1876 Battle of the Little Bighorn when George Custer was killed and his forces were defeated.

The leadership of the present gathering has been committed to a prayerful and peaceful approach, despite an escalation of tactics by the local Morton County Sheriffs. Using armoured vehicles, riot gear, tasers, rubber bullets, teargas, pepper spray, water cannons, and percussion grenades, police have arrested 556 people, including at least eight journalists according to the Bismarck Tribune, and injured hundreds more. Sophia Wilansky, a 21-year-old college student, suffered an explosive injury to her arm on November 20 when she says she was hit with a percussion grenade at the police barricade. That same night at least 160 people were injured, many suffering from hypothermia after being doused with water in the frigid temperatures.

There were other major clashes. On September 3, private security met marchers with attack dogs, and on October 27 when police cleared out an encampment, they dragged elders from a sweatlodge and made more than 140 arrests. Arrestees say they were housed in dog kennels. In dozens more incidents in the water, at the barricade, on the road and along the pipeline routes, unarmed people were continuously met with “less-lethal” violence.

Among the water protectors, there is a minority willing to posture violence and vandalize. In total, three police officers, four private security contractors, and two dogs were treated for minor, undisclosed injuries.

“The one percent makes it look bad for everyone,” says a rancher, who lives near the pipeline route and did not want to be named for fear of reprisal. He has lived in the area all of his life and says that while he knows most of the water protectors aren’t violent, some of his neighbours have been threatened. “I don’t want to have to carry a gun,” he says, but still, he’s joined the growing number of people tucking a firearm under their seat of their farm truck. “My biggest fear is that something’s going to happen. Someone’s going to get killed and then we will have a civil war.”

At the height of the protest farmers and ranchers reported confrontations with masked men and women brandishing improvised clubs that have left them feeling unsafe. In one incident, a group of three journalists conducting interviews inside the camps was allegedly intimidated and blocked from leaving. Police reported at least one incident involving molotov cocktails. Dakota Access equipment was spray painted and damaged on multiple occasions, including by Green Party presidential candidate Jill Stein.

Many of the charges against water protectors have stemmed from trespassing on pipeline land. The land in question is outside the reserve borders that are currently recognized by the United States Government, but well within the boundaries of the Great Sioux Reservation, established by the Fort Laramie Treaty of 1868.

The encampment’s challenge to these boundaries is intentional and part of a push to force the government to honour existing treaties. The Fort Laramie Treaty was the last agreement the Sioux signed, nation to nation with the American government. Since 1868, the territory has been clawed back, first with the theft of the Black Hills when settlers discovered gold in 1874, and later with legislation and private sales. Despite this, the territory is still un-ceded, meaning it has never been surrendered or sold by the Sioux.

More recently the reservation has been diminished by the damming of the Missouri River throughout the 1950s and 60s. Without affecting white ranchers or towns, the project flooded 55,944 acres of land, including prime farming land, 95 miles of roads, three rodeo arenas, three sawmills, and 190 houses in Standing Rock, without consultation. Unsurprisingly, there is bitterness about the boundaries of the reservation and a general mistrust of the government.

On January 24, just four days into his presidency, Donald Trump signed an executive action to advance approval of the Dakota Access oil pipeline in opposition to an earlier permit rejection by the Army Corp of Engineers.

When an evacuation ordered was enforced at Oceti Camp on February 22, many of the protestors were forced to leave, but not before burning down their encampments so that they couldn’t be desecrated by the police. “It was made in ceremony and it will end that way. I’m not letting it get bulldozed,” said Wanbli Mani as he watched his wigwam burn. Another 45 people, including at least one journalist, were arrested during the evacuation.

Although Oceti has been evacuated a dedicated contingent remains in smaller camps nearby, waiting for a final resolution to the project and hoping for the best. It has been a long time since government forces have attempted to clear out a Sioux encampment, 127 years to be exact. In 1890, the U.S. 7th Cavalry Regiment surrounded and attempted to disarm Spotted Elk’s band of Lakota camped at Wounded Knee creek. When it was over, more than 150 Lakota men, women, and children were dead and 51 more were wounded. Thirty-one soldiers died.

Vonda Long, whose great-great grandfather, High Hawk, died in the Wounded Knee Massacre, fears a repeat of this history. “I don’t want to be killed here,” she says with tears in her eyes. The day’s last light catches the final bit of smoke from her cigarette as she gathers her things. “I came here to live with my children and my children’s children.”