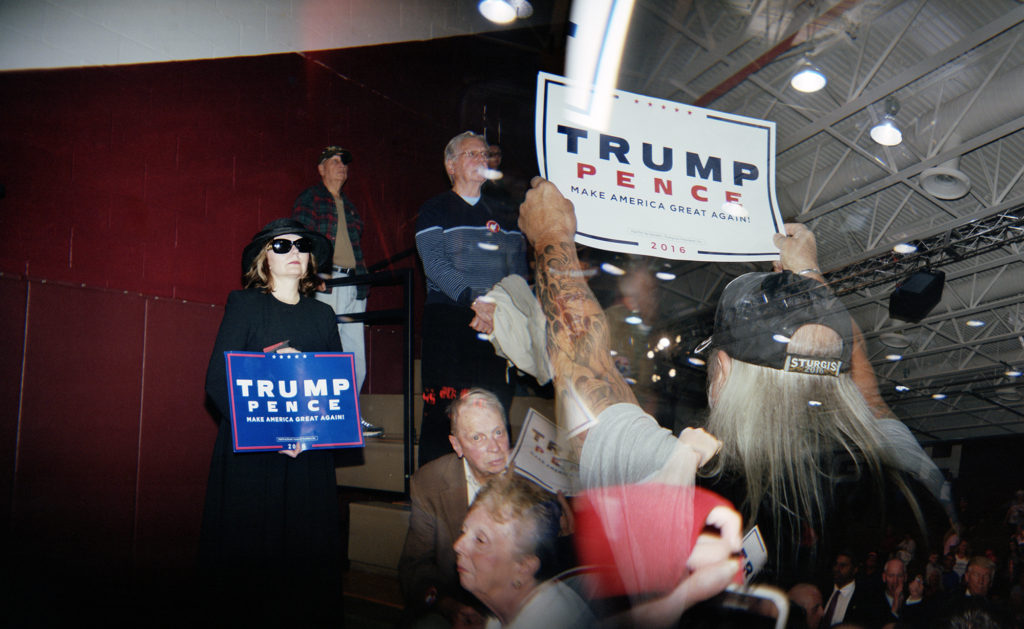 Drunk On Trump:
Double exposures offer glimpse into supporters
of one of America’s most controversial presidents

“Hillary sucks but not like Monica,” shouts a vendor holding a T-shirt with the same slogan. Men and women alike turn his way. They look at the shirt, laugh, and carry on with their conversations. At the same rally while waiting for Trump to come on stage, a woman tells her teenage daughter, “I brought you here to show you what real morals and values are.”

Just over 100 days after his inauguration, Donald Trump is being considered one of the most controversial presidents in American history. Drunk on Trump offers a view of the Trump phenomenon in the United Stated from my perspective as a Canadian outsider. Travelling to rallies, the Republican National Convention and Trump’s inauguration, I would come home and find it hard to separate my memories and feelings individually, much like when you wake up from a dream: you remember it, but it’s difficult to articulate what exactly it was you just experienced.

There’s often so much to see and hear at these events, and it’s hard to see clearly through the chaos. From the costumes to the signs, to the screaming fans waiting for the show to start, I wanted viewers to not only see what it’s like to be at these events, but to feel it too. These multi-frame exposures are created in-camera with no manipulation in post-production, adding to the sentiment that this is confusing dream we’re all just trying to make sense of.

Sarah Palmer is a photographer based in Toronto, Canada. She focuses on the relationship between place, memory and cultures on the cusp of change. She composes multi-frame exposures in camera, with no manipulation. She's also a contributing photo editor for Maclean's magazine and has been published internationally. Her work has been exhibited in galleries and exhibitions including Scotiabank’s Contact Photography Festival.
Culture