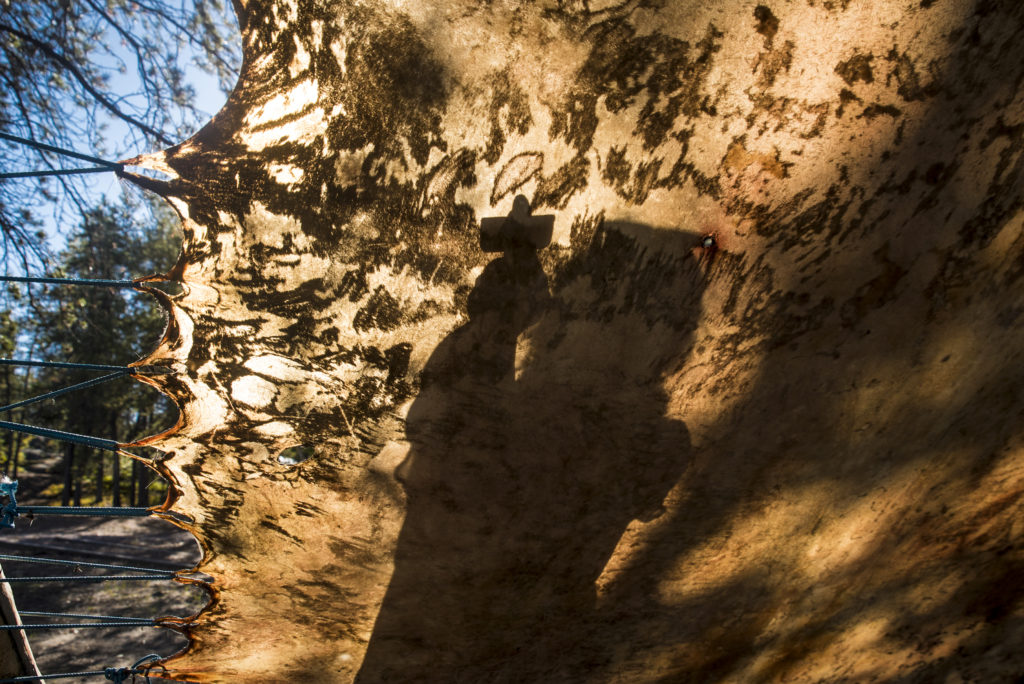 In a small park across from city hall in downtown Yellowknife, camouflaged by a perimeter of spruce and birch trees, sits a makeshift camp of teepees and canvas tents. The people here, many of whom are Dene and Denesuline, have just spent two weeks tanning moose and caribou hides. For those who have left their small hamlets for life in the territorial capital, the camp has become a way for them to practise traditional life in a cosmopolitan setting.

Now in its second year, the Urban Hide Tanning Camp is run by Dene Nahjo, a grassroots Indigenous organization whose mandate is to “protect land, language and culture forever”.

“We welcome all people into camp – Indigenous and non-Indigenous – to build relationships and learn about why our culture is important to us. In that sense, the camp is reconciliatory,” says Dene Nahjo co-founder, Mandee MacDonald.

Speaking to a group of students and tourists, MacDonald explains the process of hide tanning. “It can take anywhere from a few weeks to several months (to tan a hide)”, she says.

It all starts with a moose, harvested for meat. The hide is soaked in water for several days and the fur is cut off using a knife or machete. The next stage is to scrape all of the hairs, follicles, veins, cartilage and remaining skin by soaking the hide in a mixture of soap and brains, ringing it out, stretching it and rescraping. This step is repeated constantly until the hide is plush and ready to be “smoked” or tanned to a golden colour you’d see on a pair of mocassins.

While hundreds of curious city-folk came to watch the process unfold, the camp is not solely a show-and-tell session. MacDonald says above all Dene Nahjo’s goal is to bring indigenous elders, youth and kids together to celebrate their roots.

“We’re creating a space for indigenous people who no longer live in the communities they were born in to relearn traditional skills like hide tanning. And finally, and to a lesser degree, this (camp) is about indigenizing public spaces and urban spaces.”

The limited representation of Canada’s First Nation’s culture is an issue which exists in cities across Canada. In Yellowknife where nearly 25 per cent of the population is Indigenous, the camp offers a poignant reminder of how little of that culture is publicly celebrated. The territorial capital has always preferred to champion its history of resource extraction rather than its rich Indigenous roots. The official City slogan “Diamond Capital of North America” is printed on flags in the downtown core, boasting of mines located hundreds of kilometres north, nowhere near the city, or any community for that matter. There simply isn’t a lot of Dene imagery, street art, or cultural markers. The murals around town feature headframes of now-closed gold mines and portraits of white-skinned, bearded ghosts who came North in the 1930’s to settle the traditional territory of the Yellowknives Dene and dig for precious metals.

Despite these glaring oversights the city is starting the process of more inclusion of Dene culture through the work of its heritage committee, which made the hide camp one of the Yellowknife’s signature events to mark its 50th Anniversary.

Although the camp garnered lots of positive attention from the community, Kyla Kakfwi-Scott, one of the organizers, said there are those who seemed threatened by its presence downtown.

“When we were first setting up the camp, some people complained to a bylaw officer who came to see what we were doing,” said Kakfwi-Scott. “I think (the people who reported them) saw a bunch of Indians setting up teepees and thought we were squatting or protesting or something.”

The fact that some Canadians are still ignorant of the systemic racism and oppression which Indigenous people face is why it’s so important to celebrate traditional practices in public spaces.

“It’s important for people to know that when we do a camp like this, it’s not just cultural revitalization for the sake of keeping our cultures ‘alive’,” MacDonald says. “Colonization and the effects of residential schools have had a negative impact on our overall collective mental and physical health. Creating spaces for indigenous people has a really critical health and wellness benefit for all of us”.