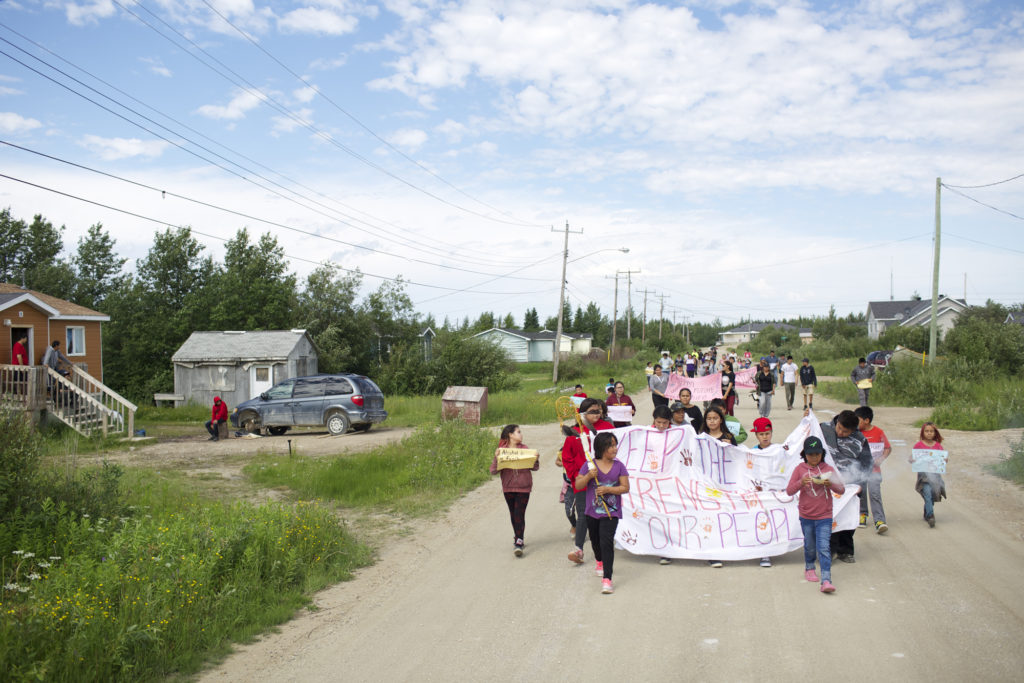 Fort Albany, traditionally known as Peetabeck, is a remote First Nation community in Northern Ontario — one of over 600 in Canada. The Cree community, accessible only by air, water and winter road, is located in Treaty 9 territory on the western coast of James Bay about 130 kilometres northwest of Moosonee.

Peetabeck is home to many survivors of the notorious St. Anne’s Residential School, where  at least 700 survivors were submitted to sexual abuse and an electric chair among other atrocities. Although St. Anne’s closed in 1964, (the school remained standing until it was set ablaze in 1999), survivors are still seeking compensation after the government’s failure to disclose the documented abuse in a previous 2006 court case led to it being dismissed.

Today the population in Fort Albany fluctuates but is usually around 900 Albanians (self-identified residents of Fort Albany). Like many First Nations reserves in Canada, Fort Albany is on simultaneous paths of recovery, re-discovery, and preservation. As key community members, including elders, have begun to further explore and promote their traditional roots through ceremonies, hunting practices, language, cuisine, music and art, it has become imperative for them to share these practices with their youth. While dealing with the effects from past atrocities, Peetabeck is practising a delicate, and sometimes divided dance, between the reclamation, acceptance, and rejection of both traditional and Western cultures. In Fort Albany, like all societies, the youth are the future. And while they are full of potential, they are also the most vulnerable and impressionable.

It is these young people, at times neglected, sometimes bored, or even abused, who face the most devastating challenges of a community severely affected by drugs, alcohol and what many refer to as the “suicide spirit”.  It seems, in the experience of this photographer, that everyone in Fort Albany has a tragic story to share, whether it was a mother, a father, a son, a daughter, or an uncle or aunt. So many lives have been cut short. The trauma is intergenerational and is rooted in the long, dark history of travesties committed against First Nations in Canada, which include but are not limited to rape and physical abuse, endured by many of those who attended residential school.  How does a community overcome the pain? Community leaders see an opportunity to steer youth on a path of healing. Young leaders recognize many of the challenges they and their peers face.

Continuous efforts are made to involve people in positive activities and reconnect them to the land and traditions that were destroyed by residential schools and other deplorable colonial activities of Canada’s past.  The intention of this work is to shed light on the daily lives of young Albanians and show that, although they face enormous challenges, there is much hope in their community.