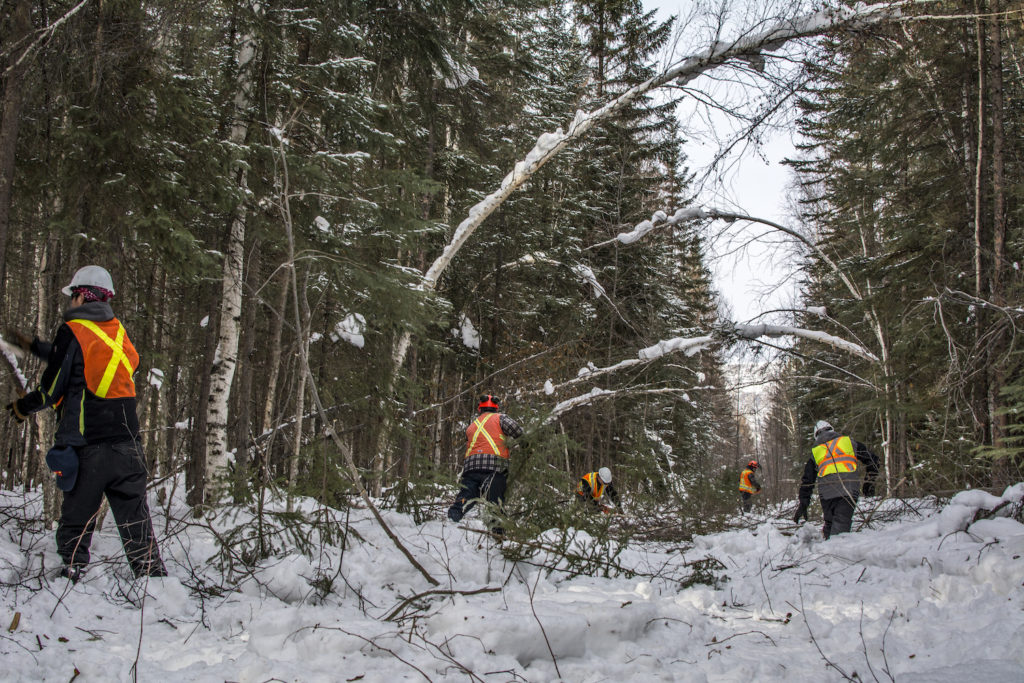 In Canada indigenous people often use the term “since time immemorial” to describe how long they have lived on the land.

Also known by its traditional name Tthenaago, the remote Dene community of Nahanni Butte in the Northwest Territories was relocated decades ago, but band members have always lived close to the mountain which is its namesake.  The community is now fighting for the right to manage development on its land after the territorial and federal governments tried to halt the band from building a road toward a proposed zinc mine.

Since the beginning of January Nahanni Butte, which has approximately 100 residents, has been employing local band members to cut a clearing toward Prairie Creek Mine. The mine, which is 90 kilometres outside of town, is still at least several years from becoming operational and has yet to receive the necessary environmental approvals.

In March the territorial government filed an injunction against the community in the supreme court after repeated requests to halt the development were ignored. The government has argued that the community is circumventing the environmental review process which is being conducted for Prairie Creek. The project, which would see a 184-kilometre all-season access road constructed from the mine site to the Liard Highway, is currently before the Mackenzie Valley Review Board with the Canadian Zinc Corporation as its proponent.

Chief Peter Marcellais blames the government for dragging its feet on the approval process for the mine, which will bring much needed jobs to the community not just in the future, but now. Marcellais said a dozen or more band members have been working on the road at any given time throughout the winter.

“A lot of that is the youth, and we’ve got some elders out there teaching them some of the skills. It’s really hands-on,” Marcellais said, adding youth have learned GPS skills and the basics of cabin-building as well. “It’s important the kids know that this can be done really simply to start. All you need is a chainsaw.”

Marcellais has also pointed out the road runs mostly through the band’a Indian Affairs Branch land, which is a shared jurisdiction between the band and the federal government. The land has been set aside for the community as part of ongoing land claims negotiations for the Dehcho region, which have also stalled in recent years.

“It’s going through our IAB lands so nobody can tell us anything because it’s our land,” the chief told CBC in January. “We’re really just trying to create jobs.”

In the government’s statement of claim filed on March 28, it argued that territorial lands in the Nahanni Butte region are controlled by the territory’s commissioner until Nahanni Butte’s land claims are settled. In addition to the injunction the claim seeks unspecified damages, costs, and possession of the road, arguing the band has “damaged territorial lands.”

All too often the isolation of living in small communities coupled with deficiencies within the territory’s education system means youth cannot attend university after high school, if they graduate from high school at all.

Since his election in 2015, Marcellais has been working on “creating hope for the future” and he is willing to pay a steep price to foster a healthy community, including a potential six month jail term if he loses the court case.

With alcoholism already already a threat to the community, the thought of drugs – particularly fentanyl, the devastating impacts of which have left marks across the country – coming to Nahanni Butte horrifies Marcellais. The solution, he believes, lies in creating opportunities for youth to learn skills, build their confidence by channelling their energy into positive activities, and fostering good influences in the community.

In order to get the ball rolling, the band approached Canadian Zinc to propose an impact and benefit agreement that could see the company finance the construction of a youth wellness camp near Nahanni Butte.

According to Shane Thompson, the MLA for the community’s Nahendeh riding, Nahanni Butte considered approaching the territorial government to build this camp. But the community felt that if they went to the government it would likely take years before the camp would be built.

“The band has taken a different approach to their traditional territory,” he said during a sitting of the legislative assembly last November. “They want to be proactive, so they took the co-management approach to doing things.”

As the band lives on the edge of Nahanni Butte National Park, Marcellais also hopes for a future where the road could open up access to the park. The resulting tourism boom could create jobs and expose young people to a world of opportunities.

April Hudson is a community journalist currently freelancing on the Deh Cho region of the Northwest Territories. Her work focuses on the personal stories and struggles of people in remote and isolated communities. Originally born and raised in the Yukon, she has reported on Alberta and the Northwest Territories for the past five years.
Current Affairs