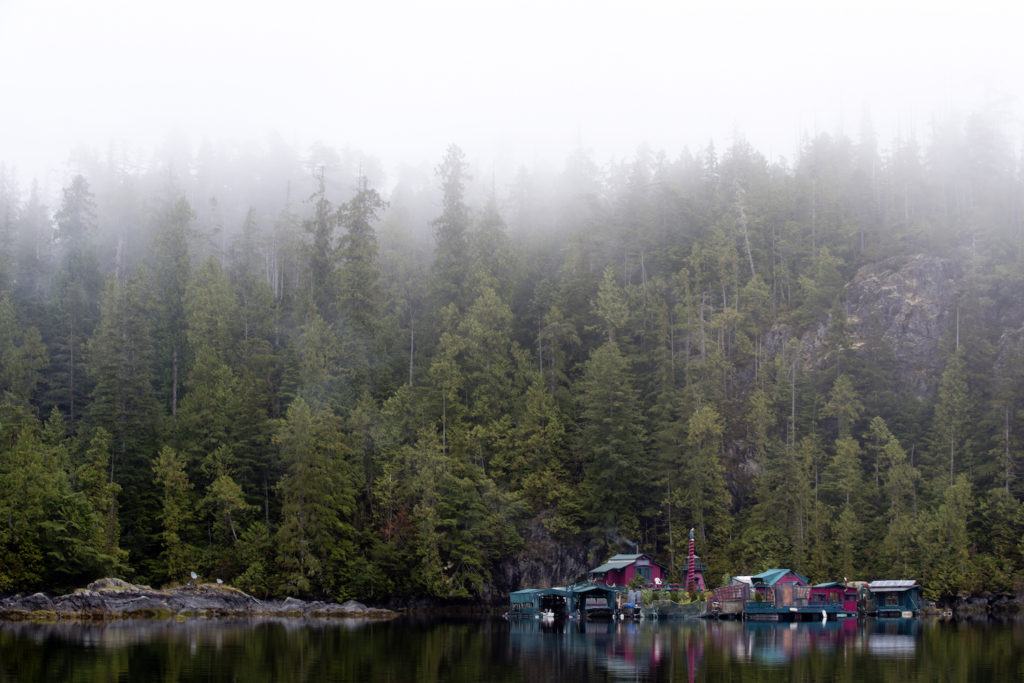 For most people Tofino, B.C. is the end of the road on Vancouver Island. Located on the west coast of the island, through mountains and temperate rainforests, visitors often travel more than six hours from Vancouver, the nearest major Canadian city, to enjoy the area’s sandy beaches, lush rainforests and consistent surf. But if you’re looking to visit Wayne Adams and Catherine King, this is just the start of the journey.

Once upon a time the couple, who met in 1987, tried to make a living as artists in Tofino. But as rent became increasingly expensive with the influx of eco-tourists, surfers and anyone else looking to get away from the city, the couple was pushed out.

So, Adams and King found a creative solution: build themselves a floating home. The home, where the couple has now floated for 24 years, is only accessible by a 30-minute boat ride from Tofino through Clayoquot Sound. The trip is remote and beautiful: whales, otters and porpoises are common sightings. Tucked away in a cove, the magenta structure is a colorful contrast to the dark forest hues that blanket the Pacific Northwest.

As children, both Adams and King formed strong connections to nature. Adams learned survival skills as a young boy in Australia, then studied biological sciences and worked in the forestry service. King grew up in Toronto but sought out nature at every opportunity. The two eventually became artists. King was a professional dancer and actress in Toronto before turning her focus to carving, painting and poetry. Adams is known for his carvings that repurpose whale teeth and animal skulls. The wilderness defines their art — ranging from candles shaped like wolves to costumes made from bird feathers — so they chose to build their home where they could be constantly inspired.

“Being immersed in nature shows in the work,” Adams said.

Adams and King have heard all the standard questions. Who gave you permission to do this? No one. What if something happens out here? The coast guard can be here in six minutes. What do you do with your poop and garbage? They are contained in storage tanks before being taken back to the city. How do you get along, just the two of you, out here by yourselves?

The couple insists that while they enjoy the peace and quiet, they are not here to isolate themselves. They have many people in town who visit — in a week, Adams and King would host a concert and dinner party for their friends.

Most importantly, they do not see themselves as “off-the-grid.” They are assigned a floating GPS number and they pay taxes. They use Facebook and watch television — Adams likes watching tennis — with the help of satellite connections.

“I’m unplugged,” Adams said. “which means I have control over my power use.”

In the middle of nowhere and without city distractions, Adams and King still need to make an effort to make time for their art. It’s a busy life maintaining a float home. There is constant work to be done just to survive, let alone fix the damage caused by unpredictable winter storms, and once, a fire.

“There’s a mistake being engineered that we don’t have to work,” Adams said. “It’s all about maintenance.”

During a typical day, Adams and King are so busy on their floating island they don’t see each other for hours at a time. Power sources have to be inspected. Gravity-fed pipes from a nearby cascade must be checked to ensure a source of running water. In preparation for the winter Adams visits Shane, their son who lives in his own float home just across the cove, to cut firewood.

“We have chores we must do,” Adams said. “I tell everyone you can’t bring a beautiful lady in the wilderness and throw her under a blue tarp. It has to be nicer than that!”

The home does not have a refrigerator or freezer. Instead, Adams and King catch and grow almost all the food they consume. For all the fresh food they eat, Adams and King haven’t yet figured out how to make their most desired pleasures: chocolate, popcorn and goat cheese. For those, they have to go into town.

Ultimately, the floating structure is more than a home for Adams and King; it’s an art project meant to be experienced. They have an open door policy and welcome visitors who want to see, however briefly, their lifestyle.

“Our life is art,” King said. “[The home] is a big art installation to be walked through.”

Adams and King know their way of life — floating on the ocean surrounded by wilderness, gathering and growing their own food for survival — isn’t for everyone. They understand why some people dismiss their way of life. For those who visit, Adams and King hope to inspire questions about traditional definitions of wealth, and to show there are different ways to live a life and prosper.

“We want to encourage people to follow their own dream,” King said. “Whatever that is.”

Taehoon Kim is a photojournalist based in Vancouver, B.C. He currently works as the staff photographer at Capilano University. He received his B.A. in political science at the University of Pennsylvania and graduated with his M.A. in photojournalism from Ohio University's School of Visual Communication. His work has been published in publications such as The Wall Street Journal, Mashable and The Globe and Mail's Report on Business. He has been recognized for his work by the News Photographers Association of Canada's National Pictures of the Year, the Ohio News Photographers Association, and the BEA Festival of Media Arts.
Culture