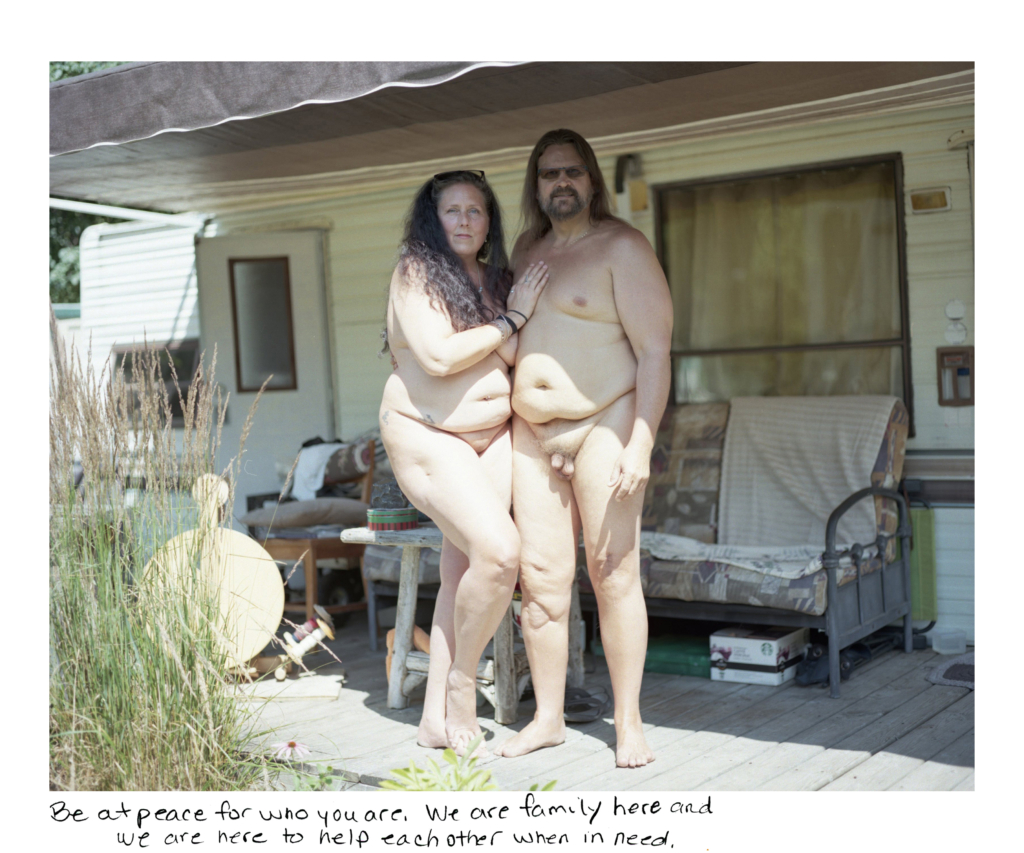 Last summer I abandoned the comfort of clothing for 10 days to bare it all at the Bare Oaks Naturist Park, a naturist community in East Gwillimbury north of Toronto.

Readers who are new to nude may benefit from a short history of naturism: the idea was first conceived in 18th century Germany, making its way to pre World War II France and then across the water to pre-Depression-era North America. Philosophies and values can vary depending on place, as does the kind of naturism you can practice, chiefly, ‘recreational naturists’ who allow for some clothing some of the time, and ‘extreme naturists’ who allow no clothing none of the time. But the core belief surmises: in being nude you are your most authentic self. I sought to uncover the truth to this.

My series entitled “Mirrors” is a reflection of my fellow naturists’ bare skin, physically, but also of their insecurities, mentally. I documented the naturists by placing literal mirrors in front of my subject, in hopes that the mirrors would act as a pair of eyes, shed light on the inner self, and finally, shatter the surface.

During the process, I became a sort of mirror. I was perceiving and judging, accepting and rejecting, as a mirror lends itself to do. Purposely placed out of view, the mirrors were both a practical piece of equipment, like a light source on the subject, and a metaphor for how others would see my subjects in this new light.

Real skin, real love and real uncomfortableness, the latter vanishing between me and my subjects through a silent conversation of acceptance communicated mostly through eye contact. This is unsettling at first because I’m not used to so much of it. If I know myself and may take the liberty of speaking for others, we can barely stand to cross the street and pay attention to traffic signs or grab a drink with a friend without flashing our phones in our faces. In regular life, we should like to tell ourselves that we share so much. And yet, we bare so little.

“Mirrors” is an exploration of memory, familiarity and vulnerability.

So, is it true? Does being nude make me more…real? What I can say for sure is that these ten days felt like an escape, a step outside of the “real world”. Here, people live in a society where conventional societal hang ups are stripped away, the social norms of clothing as status do not exist, simply because there aren’t any.

Naturists believe that nakedness is the great democratizer — everyone is on an even playing field because no one is judged by the clothes they’re wearing, all too telling of financial status — that is to say, first impressions aren’t culled from your Gucci bag. Devoid of labels, our names and what we have to offer on the planes of intellect and kindness transport naturists to a place of “authentic humanity”; a term I heard time and time again when community members described naturism to me.

Living in the nude is one way, albeit conventionally extreme, to achieving the simple life. As one naturist felt, “simplicity, acceptance, extreme happiness that I overcame the social lies that it is not O.K to be yourself. It is. And real people will love you for it.”

Katie Sadie (1987) was born in Winnipeg, Manitoba. She now resides in Toronto after being raised in a suburb just west of the city. Katie studied photography at Sheridan College. She was named as a Canadian Winner of the Flash Forward Emerging Photographer Competition, 2017 presented by The Magenta Foundation. Katie's current personal work includes long term projects with themes exploring memory, community and identity.
Culture