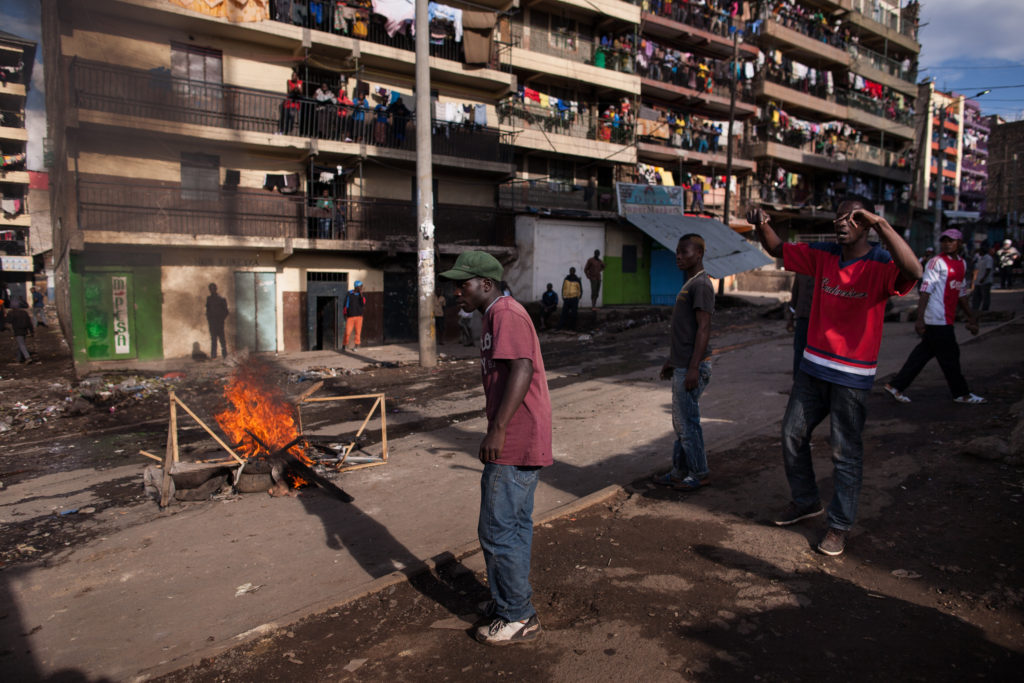 Kenya’s recent presidential re-run elections, which were scheduled after the Supreme Court annulled an earlier vote in August due to “irregularities and illegalities”, resulted in a landslide victory for the incumbent Uhuru Kenyatta.

Kenyatta ended up winning 98 per cent of the October 26 vote, leading opposition candidate Raila Odinga, of the National Super Alliance (NASA) political coalition, to call the renewed election “a sham”.

The second attempt at the presidential election was mostly boycotted by Odinga’s supporters. Less than 40 per cent of voters showed up to the polls versus an almost 80 per cent turnout in August.

Poll results in both August and October led to violent clashes between protesters and police in opposition strongholds Nairobi including Mathare, Kibera, and Kawangware. More than 30 people have been killed as a result of political violence since the August election.

The August vote was marred by confusion, violence and irregularities: results were announced earlier than required by the law without all the necessary forms and with important security information missing from them, and opponents said the margin appeared too consistent as results came in.

Odinga ended up pulling out of the newly scheduled election on October 10th saying: “We have come to the conclusion that there is no intention from the IEBC (Independent Electoral Boundaries Commission) to make sure that the irregularities and illegalities witnessed before do not happen again.” The IEBC’s chairman Wafula Chebukati later announced it could not guarantee credible elections.

The opposition submitted a petition to the Supreme Court to delay the re-run election. The day before the vote only two Supreme Court judges showed up to hear the NASA petition – not enough to make a decision – meaning the elections would take place as planned.

Following the election results Odinga called for a national resistance campaign that would include economic boycotts and peaceful picketing. He also announced the formation of the People’s Assembly, which he said “is the vehicle through which we will exercise the solemn duty of restoring democracy, constitutionalism and the rule of law.”

In Kenya, voting is widely conducted along ethnic and tribal lines. There are 42 tribes or ethnicities, the four largest being Kikuyu (22%), Luhya (14%), Luo (13%), and Kalenjin (12%). Since the country’s independence the government has been either Kikuyu or Kalenjin. Uhuru Kenyatta is a Kikuyu and he and his Jubilee Party have ruled since 2013.

The perception among many of those who do not vote for the Jubilee Party is that people in government favour those of their own ethnic background. The Luo and Luhya tend to vote for Odinga, who is Luo. During the October 26 election the counties of Kisumu and Siaya, both of which are primarily made up of Luos, along with Homa Bay and Kisii, did not vote. Protesters blocked many polling stations from operation.

This year’s elections were not the first time Odinga has been shut out of the highest office in the country. In 2007 Odinga lost his bid for the presidency as a member of the Orange Democratic Movement (ODM) to Mwai Kibaki, a Kikuyu of the Party of National Unity, by a very narrow margin. His supporters were angry at the results. During post-election violence more than a thousand people were killed.

When Raila Odinga ran again in the 2013 presidential elections, observers noted problems with the elections and Odinga decided to take the results to court, which ruled against him.

Following the August results, the African Union called for Odinga and Kenyatta to open a dialogue and search for a peaceful solution to the post-election fallout.