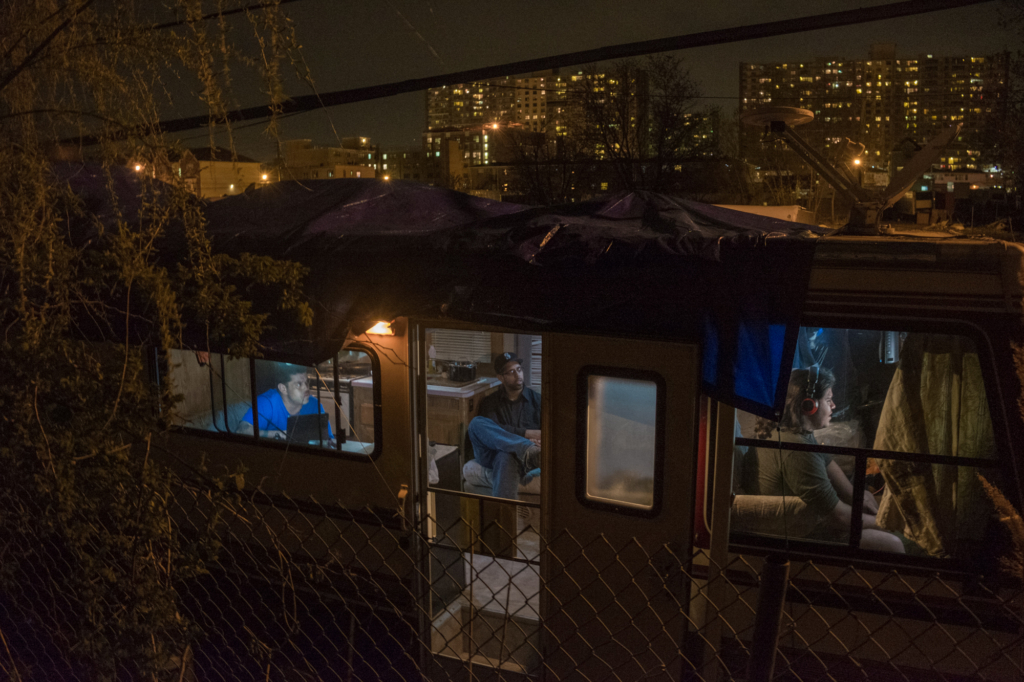 The Hole:
Photojournalist lived with a Puerto Rican family
inside one New York City’s most neglected slums

A twenty-minute subway trip out of Manhattan lies a neighborhood you won’t find circled on any tourist map. Abandoned buildings dot the landscape and the smog from idling industrial trucks choke out the sun. Floods are frequent here, as the area is thirty feet below sea level and is not connected to the New York sewage system.

To its residents, this neighborhood is known as The Hole.

Bam is one of the people who make their home here. He and his family have parked their RV in the The Hole since 2012. A 42 year old ex-heroin dealer and convicted felon, Bam has spent much of his life in prison or on the lam. Although he claims to be committed to working an honest job to provide for his family, he is finding that going straight is not keeping his bills paid.

Instability and violence have coloured Bam’s life. At age twelve, Bam was feeding pigeons on his roof when he heard a man yelling from inside his home. Bam knew something was wrong; he lived with the anticipation that something would go wrong. His family had dealt in heroin as far back as he could remember. He scrambled down from his perch, only to see a man with a knife advancing towards his mother.

“All I remember is that my uncle kept a machete behind the door in the hallway,” cites Bam. “My mother pushed me in the doorway and I went and grabbed the machete. When I came up on the side of my mother, the guy swung like he was going to cut my mother.”

“So I smacked him on the side of his face.”

This was the first time Bam took a life. Over fear of retaliation or a police investigation, Bam was ushered away to live with his aunt in California for the next few years.

Like Bam, The Hole itself has a sordid past. During the 1980s, the neighbourhood was used as a dumping ground for bodies by the John Gotti Gambino crime family. The NYPD launched a dig there in 2004 that unearthered dozens of corpses encased in concrete coffins. The bodies of dozens of snitches and rival gang members were exhumed – and may still lie underneath – the lot where Bam parked his RV.

“Parked,” in the past tense, because Bam was evicted from this lot for stealing electricity from his neighbour’s junction box.

Electricity is hard to come by. Hedged on the border of Queens and Brooklyn, the Hole is a municipal nightmare. Although zoned as residential, this distinction is rarely enforced. Contractors use the open lots to idle industrial trucks; Bam’s neighbours raise hens and roosters; and cesspools and septic systems are hidden away to compensate for the lack of plumbing.

It is a no man’s land, a neighbourhood for those with nowhere else to call home.

When Bam returned to his home in east New York two years after the incident, his reputation preceded him. He soon found himself falling into the family business, gaining notoriety as a cocaine dealer.

“When I came back to New York I came back as a man,” recalls Bam. “I took control of my life. I did the only thing I knew how to do because I grew up around it. I sold drugs.”

Things took off quickly. Bam was accustomed to violence and wasn’t afraid to use any means necessary to build his personal drug empire. By age seventeen, he claims to have moved over $150,000 of drugs each day and taken home over $3,000 in profit for himself each night.

Today, working as a contractor, Bam barely makes enough to support his family. He is not alone.

Across the street, Will is struggling to support his family – including a wife pregnant with twins. He too shares a troubled past, spending three years in jail.

“All my brother were street hustlers so I got into it with them,” relates Will. “I got busted with a bunch of guns. Thirteen guns.”

Today, he is a contractor by trade, but he cannot afford the fee to become a licensed tradesman. Consequently, Will is forced to take jobs under the table for a fraction of what he should legally be paid.

“It costs $25 000 to get licensed and bonded. If you’re not bonded, contracting is just like hustling in the street.”

It is Jose, another neighbour, whose roosters stalk the front yards of the Hole. Untamed vegetable gardens are cobbled together on his property, encircled by scrap metal and beer cans – an unsanctioned urban farm.

His home is abandoned. While he brags about building it with his own two hands, he has been unable to connect it to the electrical grid. For months now, he has resided in a small shack on the edge of his property, a satellite of his hard work.

Although trying to go straight, Bam cannot help but survey the landscape and reminisce about his glory days.

“There was so much money that it would scare you,” says Bam. “You needed a lot of people because there was too much money for one man to take, and live.”

This chapter of Bam’s life culminated on Christmas Eve, 1993. Bam, his brother, and their two girlfriends conspired to drive their new BMW – along with a suitcase brimming with $700,000 – down to Florida.

However, as Bam was parked on a street corner waiting for his brother to arrive, he heard gunfire ring out. Less than a block away, Bam’s brother was run down and shot to death by rival gang members.

“He was the more social type dude, and I think that’s what got him killed, you know?,” recollects Bam solemnly. “He didn’t have the cold heart that I had.”

After four nights of frantic searching and binging on heroin, Bam tracked down and killed the men who murdered his brother. Despite avenging his family, he was ruined. The car was gone, the money was gone – the cops had taken both – and his brother and partner in crime was dead.

Now, almost two decades later, Bam finds himself trying to cobble together a life in The Hole. He sees it as a place where his family can lay low, a place where his son can make a life for himself – and not have to go out the same way as his uncle.

However, Bam might not be able to keep his RV parked in The Hole much longer. Like many neighbourhoods in east New York, the Hole is being eyed for future development.

One property has already been zoned for seventeen town homes. Offers pour in everyday to purchase the derelict plots of overgrown land that house ramshackle shacks and RVs. There is even a municipal proposal to put in sewer systems, a move that will doubtlessly raise property values to the point where Bam and his neighbours can no longer afford to rent them.

Jose, the chicken farmer, laments that in two or three years, The Hole may disappear entirely.

Bam is getting desperate. He is running out of options and needs to make a choice.

“So what do I do? I go back to doing what I do supplying the hood with enough drugs and hope and pray that a mother fucker don’t come knocking on my door.”

Bam is is left contemplating his own catch-22: he feels he must return to crime to support his family but returning to that life risks destroying his son’s future.

This dilemma is reflected in his geography. The Hole is a paradox in itself: halfway between Brooklyn and Queens, decay and gentrification, New York and another planet. People like Bam have spent years trying to claw their ways out but every day keep sinking in deeper.

Allen Agostino is a Photojournalist and Long-Term Documentary Photographer, who graduated from the International Center of Photography in 2014. Allen has worked for Aljazeera America, News Day, The Toronto Star, Narrativley, Newsweek, The Independent and Inside Toronto.
Documentary