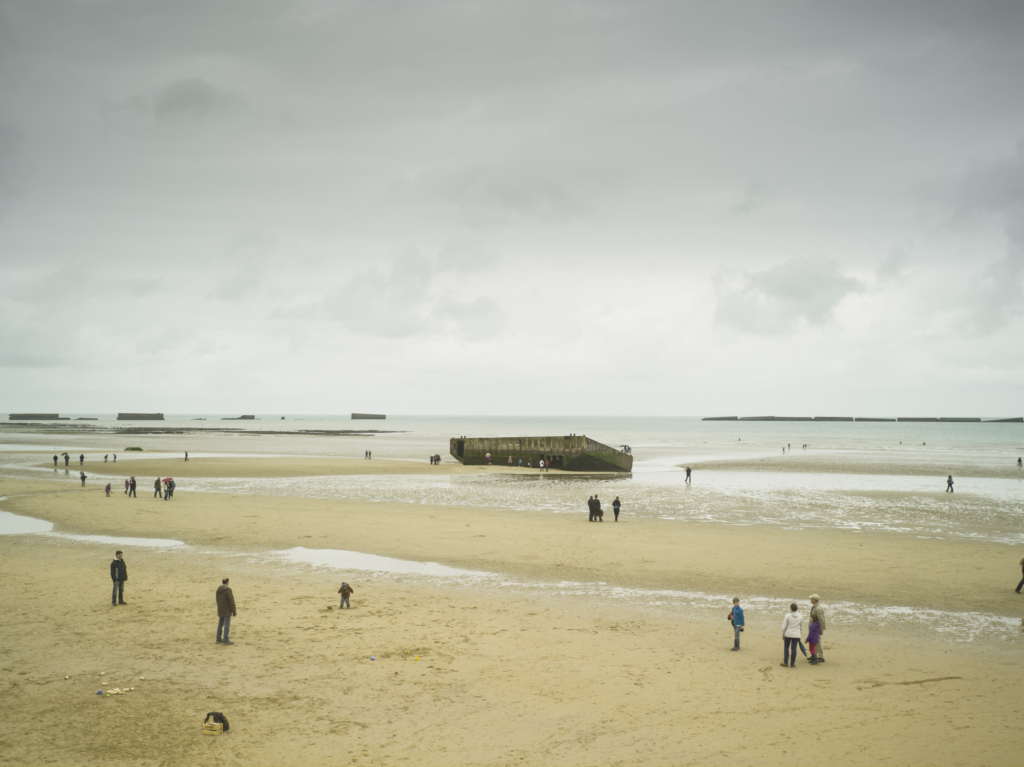 In 2012 Canadian documentary photographer Donald Weber set out to find a new approach to visual storytelling that strayed from the traditional photojournalistic style of his work. What started out as a plan to make just a few images ended up turning into a sprawling work about the legacy of World War II, which was published as War Sand in 2017. True North Photo Journal recently asked Donald some questions about why he is so fascinated by the war, what motivated him to undertake such an ambitious project, and why he decided to use microscopic images to expand our understanding of the legacy of conflict.

True North Photo Journal: Where does you fascination with World War II and specifically D-Day come from?

Donald Weber: My grandfather served, which also forms the impetus of War Sand. When I was a young boy, he told me the greatest sea story ever told. It was the first time I heard the word “commando.” The story he told me goes like this:

During New Year’s 1943, nine British commandos were ordered to cross the English Channel and surface on the beaches of Normandy in France. On landing, they had to meet with members of the French Resistance. The mission was to covertly collect sand and soil samples along a vast stretch of coast, from Ouistreham in the east to Cherbourg in the west. They had two days and nights to cross the Channel, collect the samples, and return without being caught. France, and the seacoast in particular, was thick with German forces. The Atlantic Wall, Hitler’s dream fortress, was a wall of pure concrete, guarded by massed artillery and elite soldiers. To be caught meant certain execution as spies.

They would swim under the sea, roam the beaches at midnight, and keep invisible. They would have black masks, rubber fins, wool turtlenecks, black Fairbairn-Sykes daggers with ring grips, Welrod silent pistols, and sampling tubes. It was a perfect plan. The British commandos would cross the Channel and complete their mission, swimming up the coast with the midnight tides. If the commandos made it back to Britain, the samples would undergo scrutiny by scientists, geologists and physicists. Supreme Allied Commander Eisenhower and Field Marshal Montgomery were counting on these minuscule grains of sand to withstand the weight of an invasion force, the largest the world had ever seen. Thousands of ships, soldiers and armaments would land on Normandy’s beaches for the liberation of Western Europe. But first, the commandos had to complete the mission.

At the end of his story, my grandfather opened a small wooden box, and unwrapped a small glass tube from a white linen cloth. It contained a pinchful of grey sand.

“This is what we brought back.”

So, it’s about having that weird, alluring, personal story that was passed down from my grandfather to me.

TNPJ: The book War Sand is a sprawling work with 398 pages and 195 colour images. What motivated you to undertake such an ambitious project?

DW: I never set out to make such an epic. In fact, the original idea was to just make around 10 – 12 images of micro-archeology, and that would be it. It was an intermediary project, nothing more. But what happens in photography is the just the revelation of something new, which is always what I seek. What can I learn from something? And if I can learn, I want to keep going. But as I was working within the project, I suddenly realized War Sand was more than just an aesthetic impulse, but also significant questions of time, deep-time, encounters, traces and narrative began to unfold. There are all kinds of stories, and the ones I tend to skew towards are not the domestic dramas – this are interesting – but swing wildly for the fences. I think of the apocryphal quote surrounding Arthur C. Clarke and Stanley Kubrick’s 2001: A Space Odyssey, which goes something like this: “If you understand 2001 completely, we failed. We wanted to raise far more questions than we answered.” This book is not for everyone, but if you’re interested in a serious-minded examination beyond photography, to dig deep within a work that doesn’t give you the obvious answers, then War Sand is for you.

TNPJ: It took you nearly four years to complete this body of work, how did you understanding of your role as a storyteller evolve over that period of time?

DW: Actually, the core of the idea was fostered over the summer of 2012; I wrote a proposal that Fall, and my first trip was May, 2013, so closer to five! However – that is short. My previous publication, Interrogations was eight years! And yes, I absolutely evolved. What I started understanding in the creation of War Sand was first to consider how we define our humanity. What I discovered through this process, is twofold and can be seen as the quantifiable and the qualifiable.

So, the former means the ability to measure things, to make sense of the complexities of the universe through science, through math, through knowledge. The latter is more my comfort zone, the idea that as humans we need to make sense of experience. How do we do that? Effectively, through the stories we tell, and how we choose to tell stories. Photography is such a compelling medium. I can construct a framework for you to participate within, but in the end, your experience is determined through your own cultural and social frames.

TNPJ: War Sand is a departure from your usual photojournalist work. Your process included teaming up with physicist Kevin Robbie to create X-ray images that showed traces of shrapnel from the D-Day landings that remain in the sand to this day. What can this book tell us about the legacy of World War II that a more conventional account couldn’t?

DW: War Sand looks beyond the battle itself, but into the traces we leave behind. When I was working with Kevin we came across an image that the Scanning Electron Microscope had trouble decoding, just what was this microscopic artifact? It turned out to be what Kevin called “cosmic space dust,” an artefact of time that goes well beyond the human presence on earth. This image connected me to the question of – well, what next, what’s beyond our human imprint? It’s about our technological traces of human stupidity.  And so these images of micro-archeology present these scratches as maps of the injuries the fragments suffered at their birth. With enough knowledge as to how these scratches are created it would be theoretically possible to reconstruct the “local history” of the item in question, in the same manner that scientists are able to frame and answer larger questions of the universe’s origins during the first few seconds of its existence. Undoubtedly, future advances in micro-archeology will provide a large-scale map of a moment in time from a single particle, a micro-world map that crosses the divide between physics and metaphysics.

TNPJ: The website for your book states that “War Sand seeks a great truth: What is history? And what does it mean to us, its creators and survivors?” Do you have answers for these questions or is that up to the reader to decipher?

DW: I like to pose questions, and go out trying to seek. I never want to know the answer, but I do want t pose questions. Questioning allows us to speculate to our fates, our histories, our relationships.

TNPJ: The generation of people who remember World War II is becoming increasingly scarce. Why is it important to finds new ways to understand this conflict?

Conflict goes well beyond the humans who waged war, but begins to ask questions into the nature of war, the geographic imprint that war leaves. With the images of the “cosmic space dust” mentioned earlier, it begins to see war not just as a moment defining our political landscape, but rather, the “cosmic” landscape of our responsibility to the planet, and to each other. We can see wars not as starting and stopping, but rather as battles with tragic consequence, from the trauma of conflict, across social, geographical, cultural and political means. Walk on a beach, get some sun, go for a swim – and then ask yourself, what am I really stepping on? What came before me, and what will I leave behind?

To learn more about War Sand head over to: www.warsand.com

Donald Weber a documentary photographer whose work examines the hidden infrastructures of power, be it economic, political or social. He is the author of four photography books including Interrogations, about post-Soviet authority in Ukraine and Russia, which was selected to be included in Martin Parr and Gerry Badger’s seminal ‘The Photobook: A History, Volume III.’   He is the recipient of numerous awards and fellowships, including a Guggenheim Fellowship, the Lange-Taylor Prize, the Duke and Duchess of York Prize, two World Press Photo Awards and shortlisted for the Scotiabank Photography Prize. He serves on the faculty of the Royal Academy of Art The Hague (KABK), The Netherlands, and is beginning his PhD studies.
Documentary