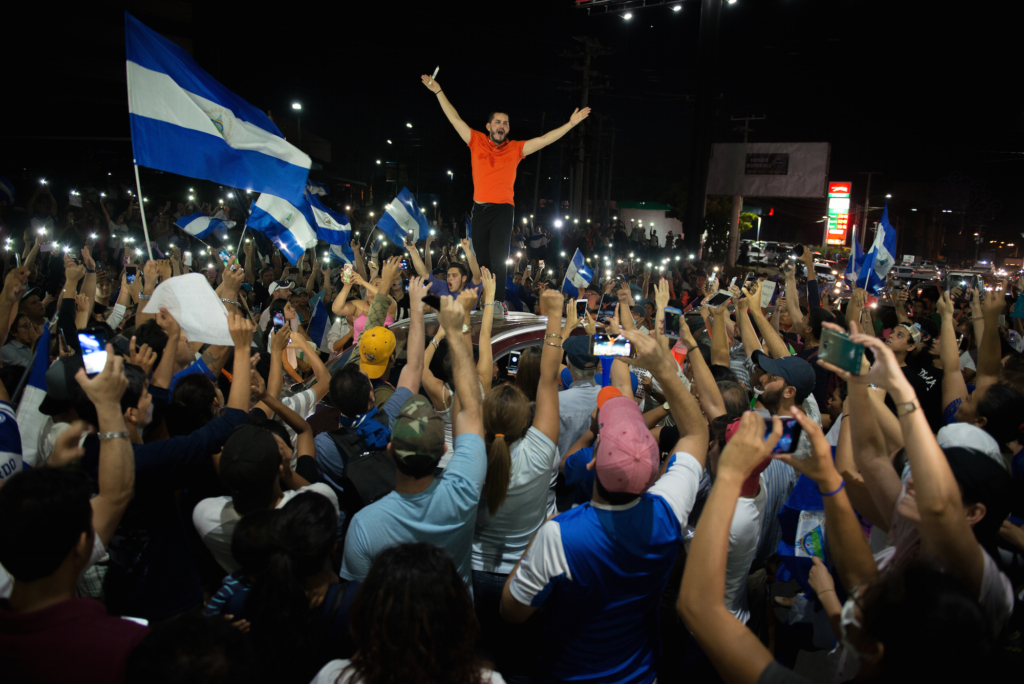 of 28 people during anti-government protests

Nicaragua’s embattled president is facing pressure to resign after 28 people were killed and more than 120 protestors were jailed in anti-government protests.

The hostility began on April 18 when Nicaraguan President and former Sandinista revolutionary leader Daniel Ortega enacted reforms to the social security system, which raised taxes for workers and employers while also lowering pension payments for people who had contributed to the existing system.

Unhappy about the changes, workers and pensioners took to the streets across the country to peacefully demonstrate their opposition. In Managua and Leon the protestors, including elderly retirees, were viciously attacked by gangs of Juventud Sandinita (JS) – a youth group that supports the current government and their ideology. The Ortega regime has been known to deploy the JS as their shock force to intimidate, counter protest movements and harass and attack journalists.

In response, university students across the country poured into the streets. In turn, the government cancelled classes and urged students to march in counter protest against their fellow classmates. Meanwhile the JS continued to instigate while the National Police closed in on the students.

By April 19 students at several university fell back and barricaded themselves inside their campuses to protect against attacks by police and the JS. The following day, students who weren’t caught inside the schools protested and again were met with police repression and JS violence. In Managua they took refuge inside the Metropolitan Cathedral and began usng it as a collection and distribution point for food, water and medical supplies for their classmates trapped inside the schools.

People sympathetic to the student’s plight soon arrived from across the city to deliver goods at the gates of the compounds. Meanwhile, police drove around in pick up trucks stealing water and food from anyone who approached the cathedral with the intention of delivering to the students.

Clashes escalated on the perimeter as police began to fire tear gas and rubber bullets. The students pushed back, taking more ground including a nearby university campus building that was turned into a makeshift medical clinic for the increasing number of wounded. Police responded by firing live, 12 gauge shot gun rounds into the protestors. The Red Cross was allowed inside to evacuate one student with multiple entry wounds in his stomach and chest. Inside the cathedral students feared police would overrun the gates and drag them away never to be seen again.

As photos and videos from inside the cathedral began to spread on social media, the National Police issued a statement that was broadcast by media outlets owned by the Ortega family.

“Our Police Institution has not entered, has not attempted to enter, nor does it intend to enter the Managua Metropolitan Cathedral campus. On the contrary, we have been respectful of the churches, institutions and religious authorities of our country, providing protection through vigilance. and patrolling “(National Police Statement Friday, April 20, 2018).

By 5 p.m. that night police began to close in with the help of JS gangs, who managed to break into the compound. They chased down students and beat them with iron rods and motorcycle helmets. They attacked any media still present and stole cameras and equipment from teams from Nicaragua’s leading newspaper, La Prensa.

Students who managed to reach the cathedral building in time shut the doors and called for help from outside. Eventually the National Police was convinced by a priest, Leonel Alfaro, to retreat, which allowed the students to leave. But many stayed, either in protest and solidarity with their classmates still trapped inside the universities or out of fear that the police and JS would identify them and come for them later.

Following the nationwide violence which led to dozens of deaths, mass protest calling for Ortega to step down, sprang up in cities across the country, only to be met with more police repression. On Sunday April 22, under pressure from COSEP, Nicaragua’s powerful council of business leaders, President Ortega conceded. In a nationally televised press conference, the president announced the changes to social security would be revoked and his government would enter into dialogue with the business leaders to find an alternative solution to the financial crisis.

Ortega’s government argues the changes are needed to shore up the social security fund that is nearing bankruptcy but critics say years of government mismanagement has caused the crisis. Among other things Nicaragua is currently ranked 145th out of 176 countries on Transparency International’s Corruption Perception Index. The country has also been impacted by Venezuela’s financial collapse and, as a result, its inability to continue propping up the Ortega regime with cash and oil.

On April 23, celebrations broke out in Managua and across the country. Many were relieved the violence would end. Others say it is not enough and continue to call for the presidential family to step down. Mass protest calling for his resignation were held across the country on April 23. In Managua alone more than 100,000 marched to the Polytechnic University of Nicaragua (UPOLI) UPOLI to show their support of peace, dialogue and the students.

The students barricaded inside the university where the heaviest fighting took place still refuse to leave the campus. They say too much blood has been spilt, that this is about more than the changes to social security.

After six days of rage and repression, at least 28 people, mostly students and one journalist, are dead. Hundreds are imprisoned and an unknown number are missing. The country, it seems, avoided a decent into war, but the cracks are beginning to show.

Yader Guzman is a Nicaraguan born, Canadian raised photojournalist and documentary photographer. Currently based in Toronto, Canada, his personal work focuses on issues of social justice and cultural exploration of his roots in Nicaragua and Latin American history. Yader studied photojournalism at Loyalist College in Belleville, Ont.
Current Affairs