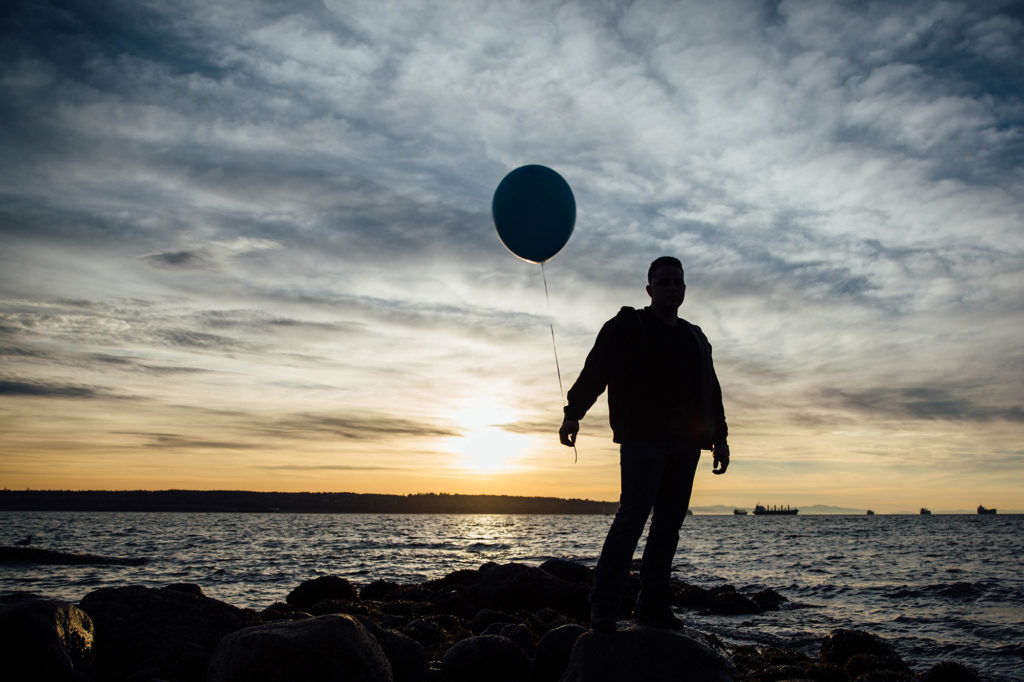 As a photojournalist, I have spent some time documenting the opioid crisis that is currently wreaking havoc in my hometown of Vancouver. A few months ago a story about drug users learning to save each other’s lives by administering Narcan, which I had photographed, went up online. That same day my brother went into treatment for a heroin addiction that has taken over his life. Readers left comments below the story expressing their opinion that the government should stop spending money on “those people”.

And that’s just the thing. It’s hard for strangers, who are removed from the situation, to understand exactly what happens to drug users and their families. There are so many factors that contribute to people using, it’s simply never as black and white as the haters make it out to be. I hope that my photos bring some light to this fact. “Those people” are people.

This series technically started 33 years ago when my brother was born. I’ve been taking photos of him since then, but it wasn’t until he relapsed, at the age of 23, after 3 years of “being clean” that he officially asked me to photograph him through his experience of addiction and recovery. Needless to say, it’s my experience too. He told me that it would be a good way for him to remember what he was trying to stay away from. And so I photograph him whenever I see him, and make a note of the amount of drugs he’s on at the time. I do it for him. I do it for me. And I do it because I think it will help the rest of the world have some empathy for users.

I met my brother for the first time on my eighth birthday. I don’t remember it at all, but there’s a photograph of me holding him on a hospital bed. I’m wearing my purple birthday dress. My mom tells me I “borrowed” a pair of her big dangly earrings and that I looked so cute. Before he understood how time worked, he would tell me he was older then me because his birthday is on the 25th of February and mine is on the 27th.

I asked my mom once if my brother was an accident. “No,” she said, “but you were.” When your sibling is so much younger than you, it’s easy to love them, but it’s harder to like them. You don’t share much in common, and can’t even really play together.

My mom had had a girl for so long that when she finally had a boy his nickname became “Boy”. Everyone called him that, including my friends, and my best friend still refers to him as Boy to this day. He loved my cooking. I did my best to impress upon him the things that I thought were cool. Things like German Film Noir and Sarah McLachlan. Before “take your kid to work day” existed, I took my kid brother to high school with me once a year. It was an “ask for forgiveness, not permission” kind of thing. And how could my teachers say no when his cute curly-haired head was right there looking up at them? He would sit on my lap in every class and I would give him crayons and paper to keep him busy. On those days he behaved. He was adored by everyone.

And then I left. I graduated from school, started travelling the world, and sent him a postcard from every place I went. When I got back a few years later he had started smoking pot and we never saw each other. For several years our lives didn’t intersect much.

When I was living in Scotland my mom called to tell me he had jumped through a window while high on Ketamine, cutting his arm so badly he had to get 47 stitches. He still loses feeling in that hand sometimes. When I was working on an organic farm in Ontario my mom called to tell me he was in critical condition in the hospital because his heart had almost stopped from some bad cocaine.

Back in Vancouver he asked to crash on my couch with his girlfriend and their friend. I agreed and laid out some ground rules. They could only be home when I was home, and no drugs in the house. They broke the rules so I kicked them out. I was always the ball-buster. He was burning bridges. I was dealing with my own set of problems.

In an effort to evade monies-owed and gang member friends who’d turned into gang member enemies, my mom convinced him to go into treatment. Alex started on June 30th, 1999. During his first month there he wasn’t allowed to call or see anyone outside of the treatment centre, so I sent him letters and postcards.

After the month passed my mom was sent a photo of Alex doing laundry, and though it sounds like a simple concept, it was a testament to how well he was doing there. That image was stencilled into my brain and I can still picture it now. I had gotten a text from him once that read “How do I boil an egg?” I don’t think Alex had ever done laundry before. Domestic tasks were out of his wheelhouse.

I would go hang out with him and his treatment friends. They were allowed to leave the grounds, as long as they were in a group. We would have coffee and I would take photos of them trying on dresses or too-tight t-shirts at Value Village.

I cried uncontrollably when he read me an amends letter. It now hangs on the bulletin board above my desk. He was in treatment for 13 months. He seemed truly happy, for the first time ever.

At his one year anniversary of being sober I didn’t speak. There wasn’t a lot of time. I didn’t know how to express my thoughts about his sobriety. I think I always sensed that it was fleeting. Looking back, I wonder if it was because committing to his sobriety was like jinxing it.

He graduated from high school and went into a plumbing program. He was clean for three years. He started abusing steroids. He started drinking. He told me that he uses when life is hard, because he doesn’t know how to cope. And he uses when life is good, because he believes he can control it. A friend introduced him to Oxycodone. He switched to heroin because it’s cheaper.

One night he came to my house and needed a place to stay. I didn’t let him in. He pleaded with me, and said it was too cold to sleep in his car, so I gave him a sleeping bag and turned him away. I believed that he needed tough love in order to snap out of his using. I thought that if people stopped bailing him out of his mistakes, he would have to bail himself out.

He went on Methadone, but continued to use heroin.

One day I took him to get a hair cut and to get his eyebrows threaded. We both have uncontrollable eyebrows. That day he was in fairly good spirits. He was constantly running a rosary between his fingers. When we stopped at a park for a bit to talk he carved a penis into a bench.

The next time I saw him was in the hospital. My mom had called me to say he was in the emergency room because he had tried to kill himself, so I rushed to his bedside where I stayed for the next several hours as he came down from his high, and my mom chain smoked outside. The nurse thought I was his younger sister. We get that a lot. The nurse said he was lucky to have me. He had several self inflicted cuts on his wrist and arm, but the doctor let him go, saying he wasn’t a risk to himself. I was mad.

In regards to his addiction, I want him to get better. I want him to want to get better. But I don’t have any magic words to tell him that will make it easy for him, or make him want to. I tell him he has to like himself enough to take care of himself. I tell him he has to have goals, something to look forward to. He has to have a good reason to wake up in the morning, otherwise he won’t care if he doesn’t wake up in the morning.

I text him often. He sells his phones. I message him on Facebook. He sold his computer to buy drugs. He doesn’t know I’ve been trying to get in touch. He thinks I don’t care.

People ask me how he’s doing and I tell them that I honestly don’t know. He’s alive, and he’s on Methadone. But I know that he has slip-ups. I know that every few months he relapses and it scares me to to death so I try not to think about it.