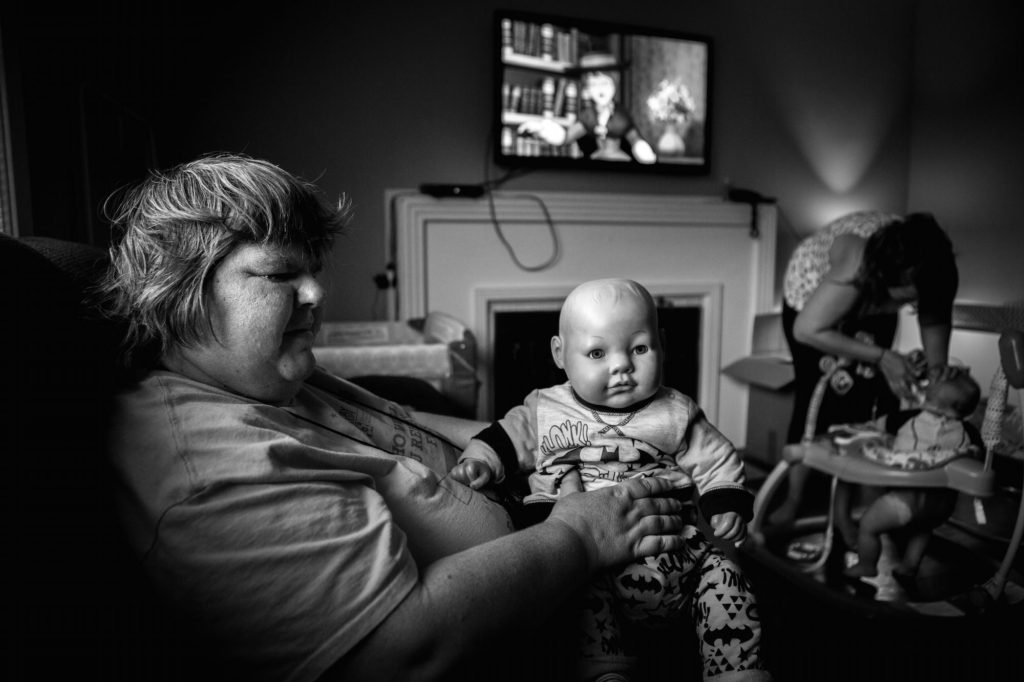 Patricia’s Dolls:
New Brunswick woman who was sexually assaulted
by father as a teen shares her heartbreaking story

Patricia Garnett is known in her city as “the doll lady.” I met her for the first time in 2013 and asked her about her story because I was curious. She told me that she had lost her child.

Patricia carries around one or two dolls around most times she leaves her house in Saint John, NB. She has not had an easy life and simply leaving the house can be an act of bravery for her.

She suffered brain damage and was close to death when she was a baby after being accidentally thrown through a ceiling. When she was 12 years-old, she was sexually assaulted by her father and became pregnant as a result. She had the baby but decided it would be best to give him up for adoption.

Patricia lives with a caretaker, Leah Urquhart, whom she refers to as “mom.” Patricia often writes letters to her son, but says she does not know where to send them so she throws them away. She says she was supposed to meet him when he turned 18, but that was four years ago and they have yet to make contact with one another . She waits patiently but does not know if she will ever see him.

I took Patricia’s portrait during our first meeting in 2013 for a blog that I used to run called “Humans of Saint John.” Her sister commented on the post and said she was happy to see Patricia’s story being told. I wanted to continue telling her story but it took me four years to build up the courage to reach out.

I reached out to her sister, Tammy, who was happy to hear someone wanted to share Patricia’s story. I then met for coffee with Patricia, Tammy, and Leah. This was one of the most difficult stories I have documented because Patricia was in such a vulnerable position. She has been taken advantage of for most of her life and the last thing I wanted to do was also take advantage of her or be an unwanted presence.

Patricia has been the subject of voyeuristic gazes in public all of her life because of her dolls so I wanted to make sure that she understood my intentions and that she felt comfortable sharing her story.

It happens that a close uncle of mine has the same type of brain damage as Patricia and I had lots of practice communicating with him, which helped me relate to Patricia. If I asked her the right questions, similar to my uncle Richard, she was very articulate and insightful. She has a lot of wisdom, she just sometimes has a difficult time getting the words out.

Patricia told me she wanted as many people in Saint John to hear her story as possible.

“I want everyone to know why I have my dolls, because maybe they will be nice to me. I don’t like telling everybody though because I get nervous,” she said.

I felt like I had an obligation to help people hear her story, so I began spending time with her on evenings and weekends in between working a local newspaper job.

Over the course of photographing Patricia, I quickly learned that she feels deeply and has touched the lives of countless people around the city. In mid-November, her story was shared in CBC and I called her to let her know. I was not able to get through during the day because she was at the hospital giving out handmade Christmas cards to sick people. “I just hope I made some people smile,” she said over the phone.