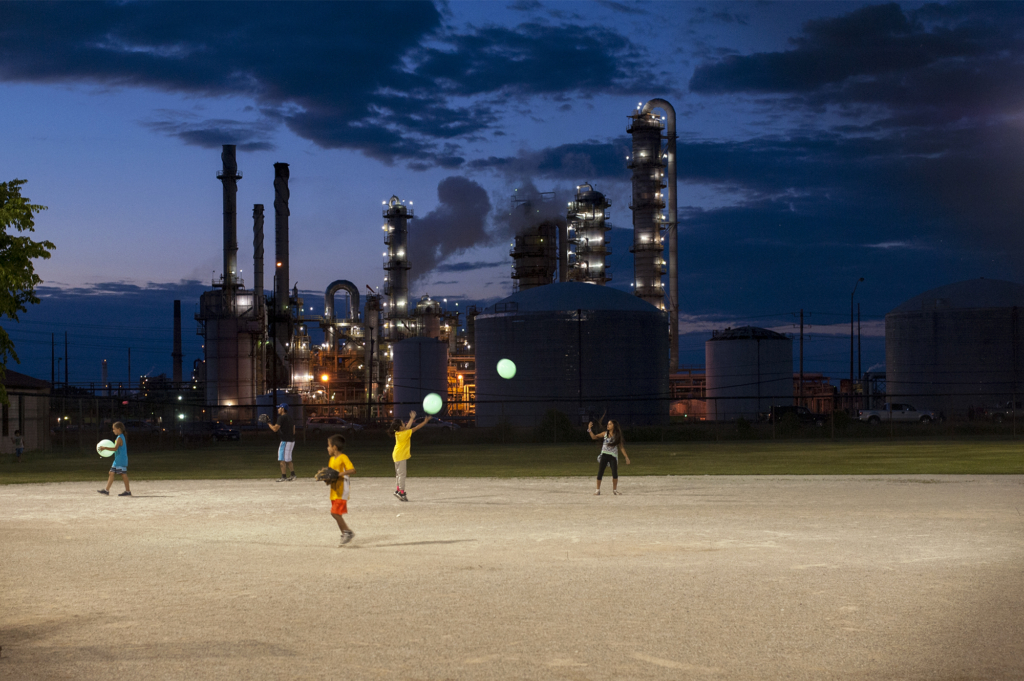 Most days in Aamjiwnaang go by quietly. Workers head to their jobs while kids go to school. Teenagers record songs, letting their younger siblings rule the playground. Meals are cooked and shared.  Football championships are lost, baseball games won. Stories are told. Lights go out and dreams takeover until the next day. Years pass. A grandfather turns fifty as his granddaughter graduates high school.

But here, life takes place in the looming shadows of 46 petrochemical plants. The roughly 850 Anishinabek residents of Aamjiwnaang are in a situation reminiscent of the contest between David and Goliath. They are determined to protect their ancestral lands from industrial forces.

Dubbed “Chemical Valley”, the Ontario region was, not so long ago, a source of national pride. The Sarnia Chamber of Commerce claimed the title and printed pamphlets extolling: “from this vast laboratory pour petroleum products by the millions of barrels, millions of pounds of synthetic rubbers; caustic soda, plastics, ammonia, solvents, ethylene glycol (antifreeze), chlorine fiberglass, carbon black and many other chemicals now essential in our Canadian economy.” Their language echoed that of the manufactures themselves. In a psychedelic brochure, Polymer Corporation explained that they “produce many types of synthetic rubber at Polymer Corporation for the makers of tires, golf balls, footwear, furniture, automobiles, adhesives, and for a host of other manufacturers around the world who make life easier, safer and more fun.” While a holiday card commissioned by Dow Chemicals featured a painting by Canadian artist Donald Mackay Houstoun (1916-2004), which according to the inscription inside “captures the dramatic and colourful effect of the special Christmas lights installed on the towers of the Styrene plant.”

The postcards once meant for tourists now serve as records of the evolution of the plants (22). When Canadian Oil Companies Ltd opened their Sarnia Refinery in 1953, its President, Harold Rea, gave the crowd a succinct history lesson: “Fifty years ago our Company opened a small refinery sixteen miles away in the tiny oil boom town of Petrolia. It is interesting to recall that the object of that refinery was to help Canada to light its lamp with the kerosene of Ontario. That refinery cost a couple of hundred thousand dollars, which, at that time, both sounded and looked like a great deal of money. Today, as I have told you, the citizens of Canada, in its  place, have helped us to build on this new site, a $23,000,000 refinery to meet needs which were never dreamed of in 1902.

Its products will be used to speed Canadian airplanes through the skies; to drive Canadian cars over tens of thousands of miles of Canadian roads; to heat thousands of new Canadian homes; to provide Canadian industries with fuel power; to provide the Dow Chemicals Company with part of the raw material used in the manufacture of those romantic Canadian chemical and plastic products, and not least, through a new pipeline, to supply essential basic material to that typically modern Canadian industry, the Polymer Corporation.” The company he mentions in that last sentence, a crown corporation owned and operated by the government in Sarnia, was so treasured nationwide that in the 70s, the Bank of Canada issued a $10 note with an engraving based on a photograph of it taken by George Hunter. According to the Mint, this particular site was chosen because the “profitable and innovative Crown Corporation had achieved a world-wide reputation.”

Chemical Valley was and continues to be woven into the very fabric of the country. Yet, in Rea’s recounting, important facts are left out, especially regarding how the sprawling petrochemical complex came to be built where the St-Clair River drains Lake Huron, in a place referred to by the Anishinabek people as Aamjiwnaang. This Ojibwa word is often understood as meaning “at the spawning stream” and designates an important gathering place used by First Nations for millennia.

The assault on the land began in the 1820s, when the British seized the area around the Great Lakes. Treaty 29 created four reservations, including Aamjiwnaang. Over the years, through controversial lands deals, their territory shrunk from 10,000 to 3,100 acres. What they lost became the property of Shell, Enbridge, Suncor, Imperial Oil, Dow Chemicals, and so on.

Once, while driving from Aamjiwnaang to the nearby city of Sarnia, a route that passes through the industrial complex, a young woman, Lindsay Beze Gray, explained how, when she was a child, she pretended that the smokestacks were cloud-makers. A couple years later, during a similar drive, Kadence Rogers-James, several years her junior, said that, given their shapes, she used to believe the reservoir tanks held cupcakes.

Attempts to make light of the situation such as these do not obfuscate the long list of noxious leaks. In 1985, a perchlorethylene “blob” poured into the St-Clair River rendering the waterway an “Area of Concern”. In 1992, a benzene release threatened the safety of infants resting at the daycare. The following year, it was toluene in the air that forced residents to leave their home at the break of dawn to seek refuge at a nearby high school. Two decades later, community members flocked to the hospital with nausea, headaches, sore throats and swollen eyes because of mercaptan. These are but a few of the more serious releases. When they happen, alarms placed at street corners and adjacent to the cemetery sound. They signal to the residents that they have to listen to the local radio station to know whether to establish a shelter in place –stay home, close the doors and windows– or evacuate. The sirens get tested every Monday at 12.30 sharp, their shriek a reminder of the hazardous surroundings (20). Everyday, toxic industrial compounds seep into the air, water and ground in and around Aamjiwnaang. No one is exactly sure of what might be the consequences of their gradual accumulation.

In 2004-2005, a community survey of health concerns revealed high rates of respiratory illnesses, learning and behavioral problems, mental health issues, cancers, miscarriages and stillbirths, amongst others. Studies also showed a decline in male births, a worrisome trend that has also been noted in animal populations living in highly polluted environments.

In response, resistance is strong and takes many forms. The Aamjiwnaang Environment Department monitors the activities of its less than desirable neighbours, and makes policy recommendations when needed and possible. It also oversees capacity-building projects that help preserve their land and culture such as a native plants nursery, and species at risks assessments. For the latter, a group of young men survey the land, counting specimens of wildlife creatures that are on the province’s endangered list. In the summer of 2016, this included looking for Butler Gartersnakes. Before starting one of their tours, Mckay Swanson shared a story in which Snake was tasked with protecting Mother Earth from ravenous rabbit. Within a couple of hours, they had found several Red-bellied snakes and two Butler Gartersnakes, one of which was dead, presumably run over by a vehicle. By demonstrating that their land is an animal sanctuary, they hope to prove that it needs to be protected.

Individuals have also taken it upon themselves to hold the petrochemical companies accountable. Sisters Lindsay Beze Gray and Vanessa Gray organize an annual “toxic tour” for the public and travel across the country to raise awareness about their community’s fight. Ada Lockridge, who’s been keeping a detailed calendar of known chemical releases, brought Suncor and the Ontario government to court in 2011 with the help of Ron Plain. Ecojustice Canada, which represented them, wrote that the pair “believe that the government’s failure to take into account the cumulative effects of pollution from all the industrial activity around their community violates Ada and Ron’s basic human rights under sections 7 and 15 of the Canadian Charter of Rights and Freedoms – their rights to life, liberty and security of the person, and the right to equality.” The lawsuit has since been withdrawn, their energies redirected at having the right to a healthy environment recognized.

But, resisting isn’t always about fighting encroaching forces, it also involves asserting one’s culture. A powerful moment came in 2014, when members of the Bkejwanong First Nation (Walpole Island), Aazhoodena First Nation (Kettle and Stony Point) and Aamjiwnaang came together for a 120 km canoe journey and walk connecting their homes which span along the shores of Lake Huron and the St.Clair River to honour Mother Earth and pass on traditions. And, every year, the community celebrates Solidarity day (also known as Aboriginal Day). It culminates in fireworks launched from the grounds that sit right across from what was once the much-hailed Polymer Corporation –it was privatized in 1988 and is now Arlanxeo. They also organize an annual pow-wow, complete with exhibition and competitive dancing and drumming. It’s a time when Dennis Plain can show off his homemade regalia, fashioned from what used to be the uniform of the British army. He added symbols of Western imperialism such as the Royal Air Cadets patch and the US Deputy Marshal badge, those of Indigenous resistance like the Mohawk Warrior Society flag, the OKA stitch, and beading which he learned from Elders.

The people’s resolve comes from the knowledge that in this toxic landscape, Aamjiwnaang remains a green lung, a haven for all its inhabitants. The drawings that youth did on photographs of their community are telling of that sentiment. Sadie Redmond and Destiny Rogers-James, the two girls seen running on one of the rail tracks that runs through Aamjiwnaang, reimagined themselves, with the help of Destiny’s younger sister, Kadence, as superheroes who have to save the world from the oil spill (the yellow blob drawn on the left side) and climate change (symbolized by the two suns), Demetrio Plain, Santana Plain and Mitchal Yellowman pictured what would happen if the moon struck the earth. Superman would try to save everyone, but since “he’s really only human, he can’t do much…” Most of the current species would die, but new ones would be created, thanks to the eternal spirit of the water.

Laurence Blutet-Roch would like to say Merci, thank you, miigwech, to the following people for their contributions to the story:

Laurence Butet-Roch, a member of Boreal Collective, is a freelance writer, photo editor, photographer and educator based in Toronto, Canada. Born and raised in Montreal, Quebec, she was nine during the last Quebec referendum. As her parents, staunch separatists, explained the stakes, she imagined La Belle Province becoming an island. The celebratory bottle of champagne was never opened and Laurence began embracing English culture. Existing with a foot in two solitudes, as Hugh MacLennan once wrote, she explores the interplay between identity, place and politics.
Documentary