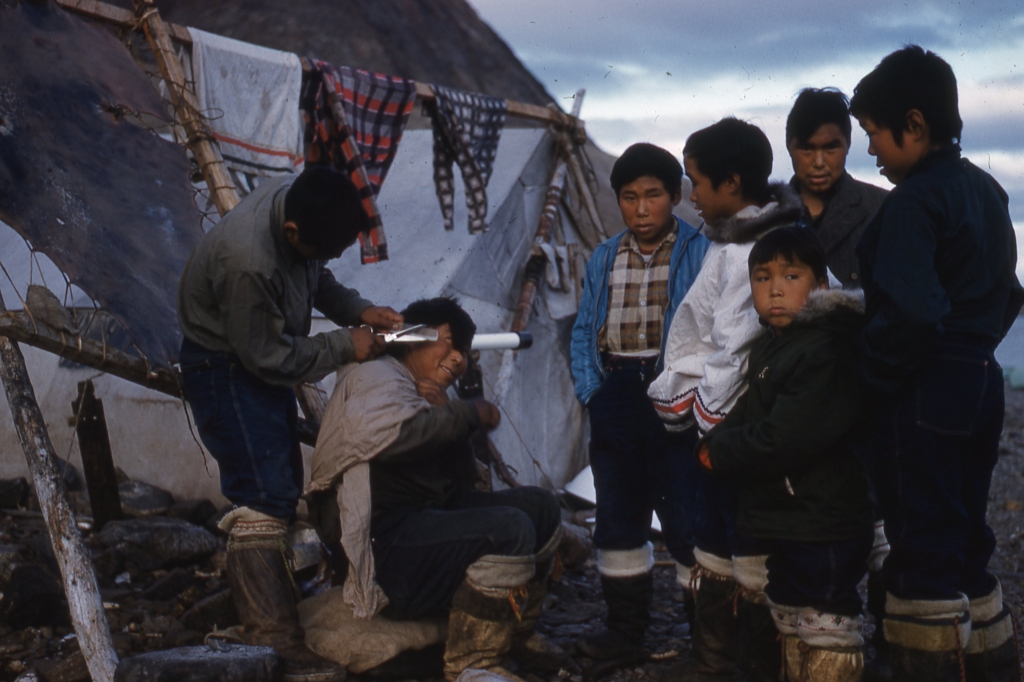 to unravel stories behind her father’s photos

Janet Murie was just 3-weeks-old when her mom carried her onto a float plane destined for Norway House in Northern Manitoba in 1957. The family was moving north so that her father John Murie could work as an outpost doctor travelling the Eastern Arctic for Canada’s Department of Indian Affairs.

Over the course of five years, Dr. Murie would visit Inuit communities such as Cape Dorset (Kingait), Arctic Bay and Pangnirtung to provide medical treatment across what is now known as Nunavut. During his travels he would end up making hundreds of pictures of the people and places he visited. Now more than 60 years later, Janet is hoping to do her part for reconciliation by uncovering the stories behind the more than 330 images that survive.

Janet had long known of her father’s photos but it wasn’t until after the death of her mother that she started going through them. The idea of trying to connect with people and get to the bottom of her father’s time in Nunavut came about when the findings of the Truth and Reconciliation Commission started to come out.

“It was really after the Truth and Reconciliation (Commission) that I really started to think about what it meant that my dad was a residential school doctor,” she said.

John was the son of a steel worker from Hamilton, On. who seized on the chance to go to medical school after the Second World War. Janet said he had a heart attack at a young age. As a result he decided taking a government job as a doctor would be more secure than opening a private practice.

“He never expected to live as long as he did,” she said.

The controversies surrounding residential schools have been on Janet’s mind ever since the 1980s when she and her dad were watching a news segment about some of the abuses that were committed at the institutions. Janet said he didn’t talk about his time up in Nunavut very much but he told her he never witnessed any abuse in the schools. She also remembers him regretting trading his job as an outpost doctor for a position with Indian Affairs in Ottawa in the 1960s.

“I think it was his connection with the people,” she said. “He was happier doing something hands on rather than pushing paper around.”

Many of the photos in the collection which include people are full of tender moments. But there are also pictures which show a darker connection to Canada’s past. One picture in particular which sticks out in Janet’s mind shows a group of Inuit people with tags around there necks on a boat. The image is indeed haunting given the Canadian government’s history of issuing tags to Inuit. Another foreboding picture shows a mountie standing over a woman as she leaves a canvas tent.

“I never expected this to be a good news story in any way. I was just interested in unravelling these threads and seeing what happened in these places,” she said. “I just figured doing that would be an act of reconciliation.”

About six months ago Janet wrote a letter to National Archives in the hopes of getting more information about her dad’s time up north. However, in a letter which she shared with TNPJ she was told the photos were “full of patient information and as such they are closed and will likely be so for many years to come to ensure the protection of their personal information.”

On the advice of a friend in the publishing industry, Janet recently reached out to Paul Seesequasis, a Willow Cree writer who runs the Indigenous Naming Project. Seesequasis, who has been helping share her father’s images, commended Janet for trying to connect with the people in the pictures.

“Visual reclamation is not only through archives or museums but those individuals whose relatives, in whatever job they were doing, left behind photos from Indigenous communities,” he told TNPJ.  “It takes courage to open that box, digitize the photos, and take the steps to say ‘These are yours.'”

It only took five minutes after Seesequasis first shared one of the images on social media before someone reached out to Janet. She has since had several people make contact with her, including an email from a woman who might have known her dad.

“I was ready for all bad news but it’s been pretty remarkable really,” she said.

Indeed, while Janet’s original goal was to confront her father’s past, she see if now focussed on connecting with the relatives of people in the images. That’s why True North Photo Journal is teaming up with Janet to help find some of those family members.

Of the 338 images ranging in date from 1957-1962 less than a quarter contain people. So far some of the places identified in the photos include Cape Dorset (Kingait), Arctic Bay and Pond Inlet, Pangnirtung.

Anyone who has information about any of the photos can either contact Janet Murie directly at deadpoetstour@yahoo.ca or True North Photo Journal at @info@truenorthjournal.ca.

Cody Punter is a Canadian photojournalist who has been living and working in Yellowknife for the past four years. In 2015 he spent two months following the migrant route across nine countries in Europe. Cody's work has appeared in The Independent, The Toronto Star, CBC, VICE, Toronto Life, iPolitics, Readers Digest, Up Here Magazine among others. He is also the founder of True North Photo Journal.
Documentary