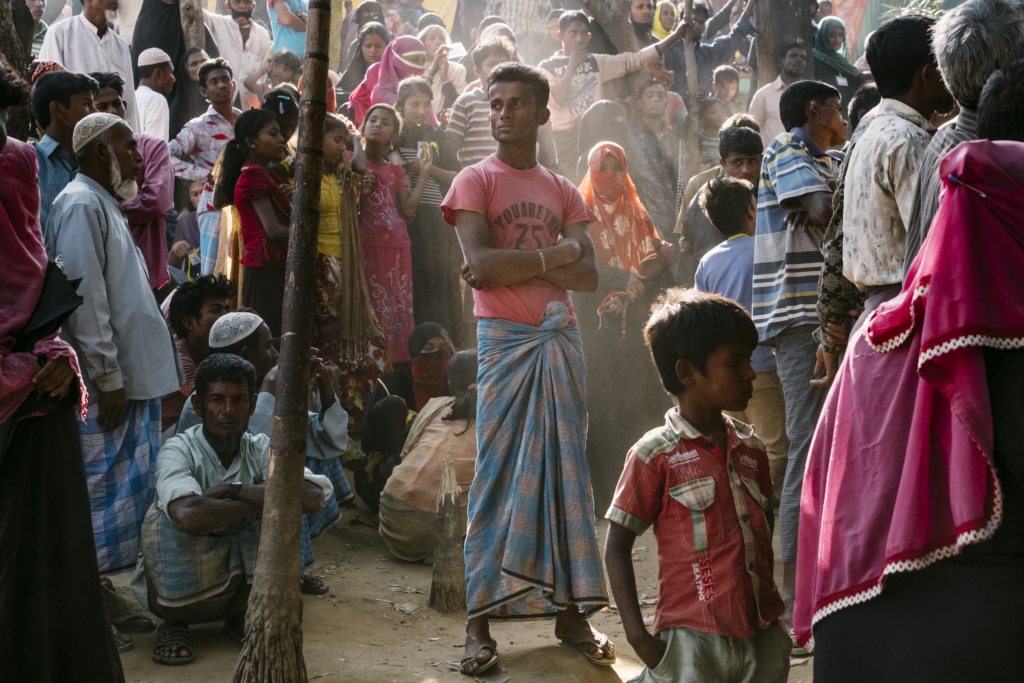 The Plight of the Rohingya:

An interview with Renaud Philippe, a photographer

covering the humanitarian crisis in Bangladesh

Myanmar’s Muslim minority, the Rohingya have long been subject to discriminatory policies at the hands of the Buddhist ruling class. In the summer of 2017, Buddhist government forces launched a wave of violence and intimidation against Rohingya in the west of the country, which ultimately triggered an exodus of hundreds of thousands of people.The attacks against the Rohingya have been described by the United Nations as a campaign of ethnic cleansing. Fleeing for their lives most of the Rohyingya travelled across the Naf River to seek refuge in neighbouring Bangladesh. Canadian photojournalist Renaud Philippe, was in the camps of Bangladesh just a few months ago to document the situation there. True North Photo Journal recently conducted an interview with Renaud to ask him about the atrocities the Rohingya have faced, and why he plans on returning to the camps to continue working there.

True North Photo Journal: Close to 700,000 Rohingya have fled from their native Myanmar to Bangladesh since the Buddhist majority government launched a violent ethnic cleansing campaign against them in 2017. You ended up spending close to three weeks in the camps in Bangladaesh earlier this year. Can you explain what the situation on the ground was like when you were reporting there?

Renaud Philippe: I was prepared for the worst, but I never could have imagined a situation like the one I ecountered in Bangladesh. How could I? It’s impossible to think that human beings can inflict such suffering on their brothers and sisters.

Throughout my last 12 years of working as a journalist I have been vistied one refugee camp after another, following the lives of victims of war, violence and natural disasters: people who have nothing left. Upon arriving at the camps in Bangladesh, I was shocked by the extent of the Rohingya exodus, which has impacted close to one million people. In the camps, plastic canvases supported by bamboo sticks are visible as far as the eye can see. The overcrowded tents are filled with families living in extremely difficult conditions. Despite the hard work of many NGOs, the vast majority of refugees do not have access to basic human needs. Nearly one million people living together, full of trauma, without knowing what will happen to them in the future. Last year in Canada, there was talk of a “refugee crisis” when 20,000 people crossed the border illegally from the United States. In Bangladesh, 50,000 refugees were pouring in from Myanmar every day at the beginning of the crisis.

TNPJ: As a photojournalist, why did you feel the need to go there?

R.P: I went there less as a paid photojournalist, and more as a human who wanted to meet people who lived differently than myself, and to see how they were living with my own eyes. I am touched by the forced wandering of a large part of humanity. My photos are the result of meetings and shared moments. Most importantly, photography allows me to share these meetings and fulfill my duty to those who opened their doors and their hearts by testifying to the injustice in which they live.

Deep down, I hope my images will lead to concrete changes in the daily lives of the people in the photos. The belief that my photos could have such an impact has waned since my early days of reporting, but I have never lost faith. If these photographs raise the awareness of even one person, who in turn engages with those who are victims of injustice, who in turn educates their children with a social conscience, full of compassion and open to the world, then that is enough to give me the strength and the energy to continue. I remain convinced that photography has a huge humanist power. An image that reflects reality in a sensitive way can reach the public and generate reactions. It seems natural to me to use photography to reveal the imbalances that exist in the world and to try to remedy them.

TNPJ: Bob Rae recently returned from a trip to Bangladesh as Canada’s special envoy to Myanmar. Last week he had to fight back the tears in front of a senate committee as he recounted brutal stories of discrimination, rape and murder at the hands of Myanmar’s Buddhist majority. What are some of the testimonies that you heard from people that you met in the camps?

R.P: I understand Bob Rae’s tears. I don’t think I could bear to hear stories similar to the testimonies I was told in the camps again in my life. I hope I don’t have to. It is impossible to think that the human can inflict such suffering on his fellow man with such impunity.

Violence against Myanmar’s Rohingya Muslim minority peaked last summer with widespread reports of sexual violence, torture and the burning down of entire villages. Two weeks after the start of the assault by the armed forces, the UN High Commissioner for Human Rights had already described them as a “classic example of ethnic cleansing”.

I did about 30 interviews with Rohingya men, women and children during my three weeks on the ground. The conversations were, often long and detailed. Each person I spoke with endured their own personal hell after years of living without any basic human rights in Myanmar. Each one saw, with their own eyes, scenes that I would not describe here: rape, murder, a savage madness worthy of the worst horrors of the Second World War, only with fewer means, directed as much toward women and children as men.

TNPJ: You have done extensive reporting on communities that have been displaced by conflict and natural disaster. How does the Rohyingya’s situation compares to those?

R.P: Every situation is different but there is a common thread running through each one.

The origin of the suffering is different, but the way of living is the same, the resilience humanity is impressive. I worked for several years with the Bhutanese refugees in Nepal, who spent about 35 years living in makeshift camps lost in the Nepalese jungle. With the Rohingya, I felt like I was reliving the ealry days of this Nepalese community which I encountered just before the UN decided to close it down a few years ago. They were subsequently resettled in seven host countries. Thirty-five years of wandering left several generations of Bhutanese living within a network of fractured communities strewn around the planet. For the Rohingya, the long wandering is just beginning and no one can predict when they will be able to find peace.

TNPJ: What makes the situation in Myanmar so dire?

R.P.: The Systematic violence and the hatred that has been directed toward this community and above all the unspeakable cruelty. The Rohingya have lived in fear since the 1990’s. Their most basic rights are disregarded without the international community intervening. In August 2017, the Burmese junta exerted so much cruelty against the Rohingya to consciously drive out as many of them as possible. In just a few days they destroyed the lives of hundreds of thousands of people as well as those of future generations. Children born in the camps, without education, with the status of a refugee will be raised with the knowledge that they are outcasts, unwelcome in their ancestral homeland.

TNPJ: Myanmar and the UN recently signed a framework for the ‘voluntary safe’ return of Rohingya refugees. Based on your conversations with people at the camps, how do you think the Rohingya will respond to this?

R.P.: No one wants to go back to Myanmar, at least not right now, especially without the guarantee that their fundamental rights will be respected. No Rohingya trusts the Burmese government to provide them with a reasonable quality of life free of persecution. The demands of the refugees are very clear: the respect of their rights, the return of their land, their villages, an education for their children, the freedom to circulate as they see fit, the freedom to practice their religion, all of which should be supervised by a UN peacekeeping force. But no one has any illusions about the situation. Most of the elders know that they will die in the camps, far from their country, far from the life they built. In addition, their villages were looted and burned. The Burmese government has built host “villages” to show its “good faith” to the international community. But these “villages” are already surrounded by barbed wire, protected by the same forces who committed the atrocities in the first place. I strongly doubt that any Rohingya will return to their country any time soon.

TNPJ: You are currently trying to raise money to return to Bangladesh. What do you hope to achieve by going back?

R.P.: I’ve been obsessing about returning ever since I got home. For the past 12 years I have been self-financing my independant journalism, but this time I need a bit of help. When I return I won’t be going alone. I plan to work with a filmmaker to create a short documentary which will be less of a journalistic document and more of a cry for humanity.

One of the purposes of photography is to permit those who are not able to travel to put themselves in the skin of those who are suffering – to make them react. For me it would be immoral to stay in the comfort of my home when there are so many people that are suffering.

Renaud Philippe is currently trying to raise money to go back to Bangladesh. Follow the link below to support his effort: