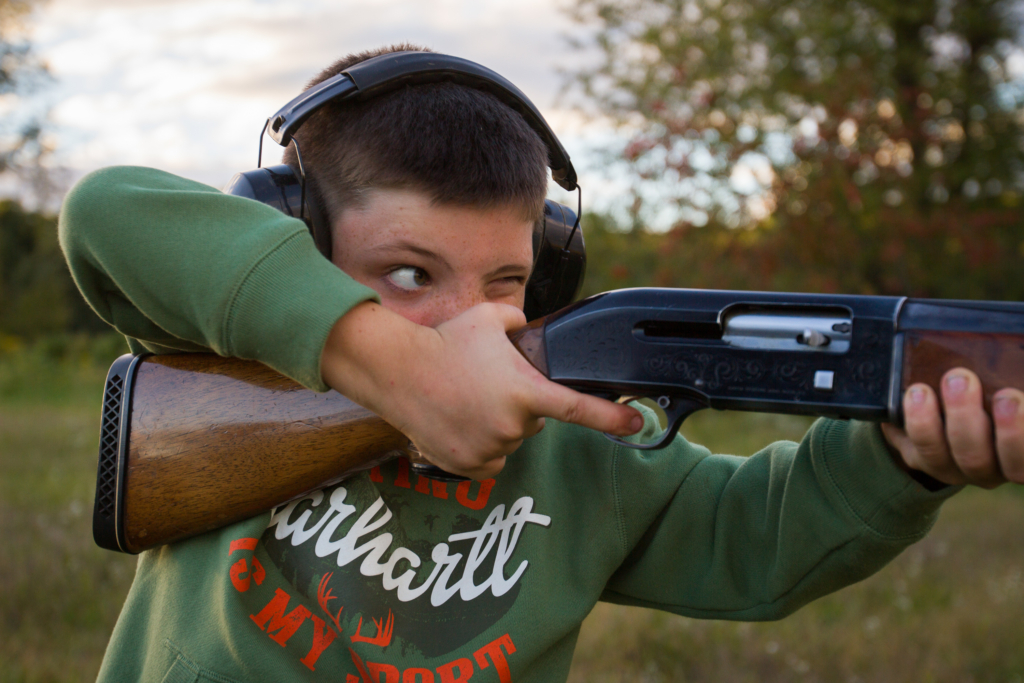 In rural Missouri a young boy

is raised in the old ways of the Midwest

The first time I met Colt, he was shooting paper plates with a bow and arrow from horseback at a gallop.

Most days after school and helping with chores, Colt takes a BB gun and goes trail riding on his pony, taking potshots at anything that moves. Other times he’ll head out on foot to his treehouse and wait patiently for an unsuspecting squirrel to scurry by.

These afternoons often seem to yield stories like the time he ‘accidentally’ got on his pony backwards.

“Well he starts runnin’. And then he starts buckin’. I had nothing to hold on to,” Colt said. “I’m like, ‘Okay, I’m not going to make it.’ so I swing myself off and land in the dirt and he just turns around and he’s like ‘I ain’t coming back for you kid’ and he just starts runnin’.”

Colt and his family live on a horse farm just outside Cuba, a small town in Missouri along Route 66.

Hunting runs deep in the Mitchell family. At eight years old, his skills go far beyond hunting small game with an air rifle. His trophies include multiple deer and an elk that he’s shot on various family hunting trips.

Steve Mitchell, Colt’s father, said he feels it’s important for Colt to learn respect for guns at an early age. He believes it’s better for Colt to have the opportunity to learn about firearms in a safe environment, rather than on his own later in life.

“I do have a big heart and I love my kids to death, but there is not a tolerance for disrespect. My dad raised me right. I’m raising Colt right. Colt’s kids will turn out right, I guarantee ya.”

Mitchell said everyone he knows in the community own guns and about half the kids Colt’s age have a similar relationship with them.

“If you take the time to teach a child about a gun and how to be safe with it and he does something bad with it, it’s because he’s bad. It’s not because he didn’t respect the gun.”

A study study by the Center for Disease Control estimated that between 2012 and 2014, 1,300 children were killed per year by gun violence across the United States.

Moreover, fatalities related to firearms are the third leading cause of death in children between the ages of 1-17 with four percent of children in the same age group having witnessed a shooting within the last year, according to a study published in the journal of paediatrics. 1

Despite having the sixth highest firearm homicide rate in 20162 and rising gun violence across the country3, Missouri has relaxed its gun laws in recent years. In 2017, the state passed constitutional carry legislation that allows gun owners to carry concealed firearms without a permit or special training.

Mitchell said blames many of the problems in America, including gun violence, on poor parenting.

“I feel bad for the kids in America, for the way our family society has been broken up,” he said.

That’s why Mitchell believes it’s so important to spend time bonding with Colt whether it’s over guns, horses or hunting.

“If my kid’s gonna do something, it’s on me. If my kid ever shot somebody, you should throw me in jail, because I did a poor job teaching my kid to respect other people.”