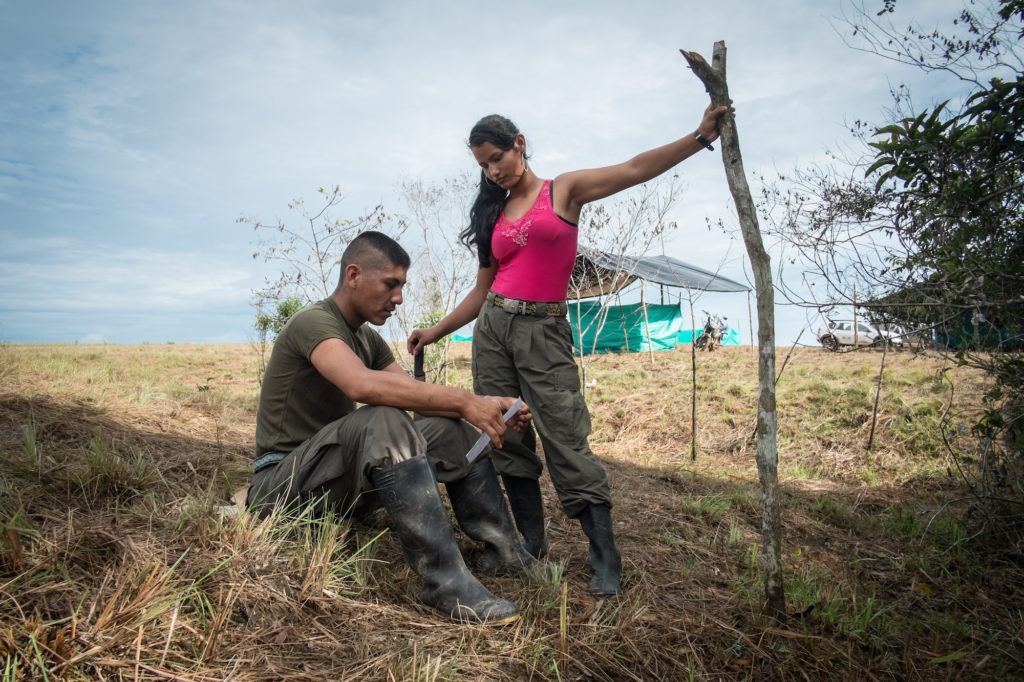 I had already been in Colombia six months by the time the Armed Revolutionary Forces of Colombia (FARC) held their 10th and last conference as an armed group. The event, which took place at El Diamante (The Diamond), provided an opportunity for the organization to open up to the world and celebrate the peace agreements with the Colombian state. The accord ended more than 50 years of war between the communist group and the government, which resulted in 220,000 deaths and left 6.9 million Colombians as internally displaced people.

The van I shared with others journalists was running fast in the Yari Plains by night. We were already rolling for three hours when suddenly, a young woman with an AK-47 slung over her shoulder barred our way with two other men. We stopped. After asking our names and what we were doing, she coldly tell us to keep going. We were entering FARC territory.

It was only the next day at the morning light, that I could contemplate where I was. I woke up in a bed of straw among dozens of identical shelters. A suffocating heat filled the giant plastic tarp that was protecting us from the rain. The guerrilleros were already very active, some of them preparing food, others cutting wood or cleaning their weapons. A few hundred metres away a marquee and a gigantic scene were waiting for the night shows.

The place was filled with a feeling of hope and camaraderie that I did not expect. We felt we were living an historic moment, in a few days one of the oldest running conflicts in the world would come to an end. In the middle of the last century, (Between 1948 and the early 1960s), Colombia was plunged into an era which is referred to as “La Violencia”. The period began on April 9th 1948 with the assassination of Jorge Eliécer Gaitán, who was the leader of the liberal party. During this period liberal and communist self-defense zones appeared in the countryside to counter the political repression of the conservative party. The FARC were born from these peasant movements struggling for a political voice and for an agrarian reform. The rebel group was officially founded on June 22nd, 1964, following an attack by the republican military of Marquetalia, one of the main autonomous zones.

The plebiscite of October 2nd, 2016, changed everything. The “No” won by 50.21% reminding everyone that Colombia would not change that quickly. Then five days later, the Nobel Committee announced that it awarded President Juan Manuel Santos the Nobel Peace Prize “for his determined efforts to bring to an end more than 50 years of civil war in Colombia”. The expectations increased when the Santos government met the opposition to listen to their propositions. In a short time, FARC and the Colombian state agreed on some modifications to the accord that were negotiated for four years in Havana, Cuba. Finally, on November 24th, a final signing took place in Bogota.

Even if the agreements put an end to the war between the militia and the Colombian state, there are still strong reasons to worry about the situation in Colombia. In 2016, 117 community leaders and human rights defenders were assassinated, while another 92 have been murdered this year, according to Fundacion Paz & Reconciliacion. FARC dissidents that do not want to go back to the civil life also emerged in various regions of the country. The challenges are great but both part show a serious will to end the conflict.

In August the guerrillas officially handed over the last of their weapons to the United Nations mission in Colombia. The historic moment led President Juan Manuel Santos to declare “with the laying down of arms … the conflict is truly over and a new phase begins in the life of our nation”. At the beginning of September FARC announced the founding of their new political party: Fuerza Alternativa Revolucionaria del Común (Revolutionnary Alternative Forces of Colombia), which yields the same acronym — FARC — as the guerrilla group. The party is guaranteed to have a quote five of the 102 seats in the senate and five more seats in the House of Representative between 2018 to 2026. Although they have laid down their weapons, FARC is guaranteed to have a say in Colombia’s future.

Alexis Aubin is a Canadian photo-journalist based in Bogota, Colombia and represented by Hans Lucas. Photography became his way to raise awareness about communities' resilience while studying social sciences in Marie-Victorin College. He studied international studies at Laval University and took a commercial photography degree at Marsan College. He now works for the international press and NGOs in Latin America. His work been published in Embassy, La Presse, Le Devoir, Urbania among others.
Documentary